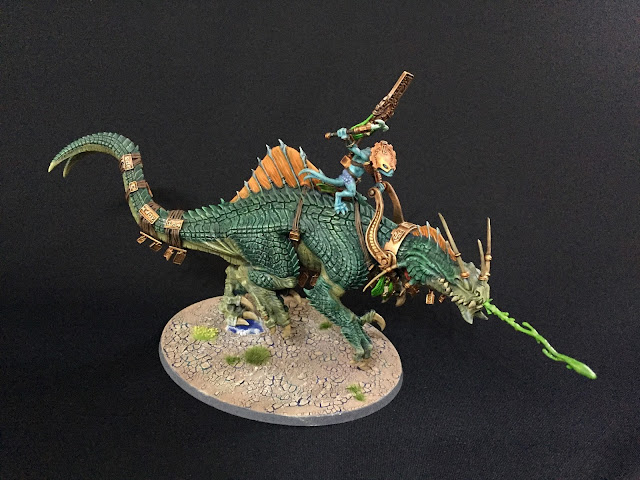 I have loved this model ever since it come out in 2013 but never justified the £50 price tag. Then along comes the Start Collecting Box and voila, justified.

I wanted to keep him in the same lose scheme I have used for the rest of the army so decided to use the colours of the Saurus but reversed. 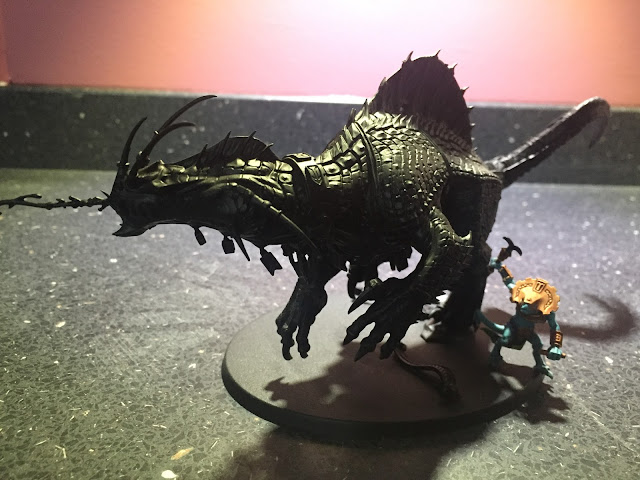 As always base undercoat of Black. 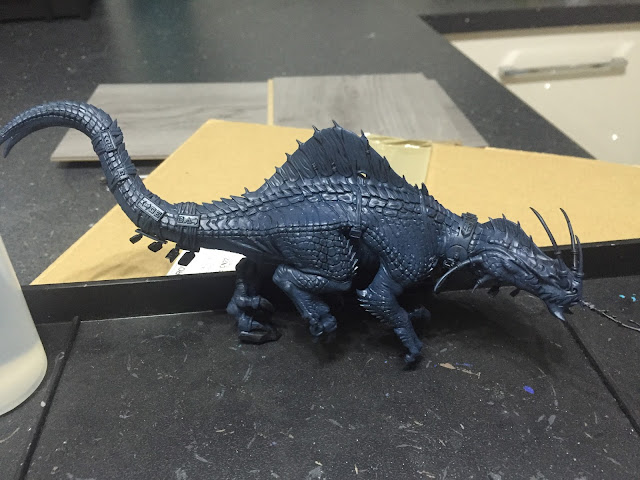 All over base coat of Stegadon Scale Green. 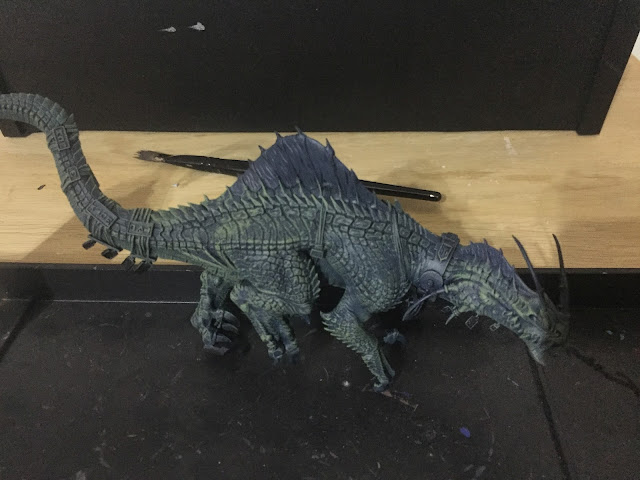 All over dry brush of Loren Green but not on the fins. 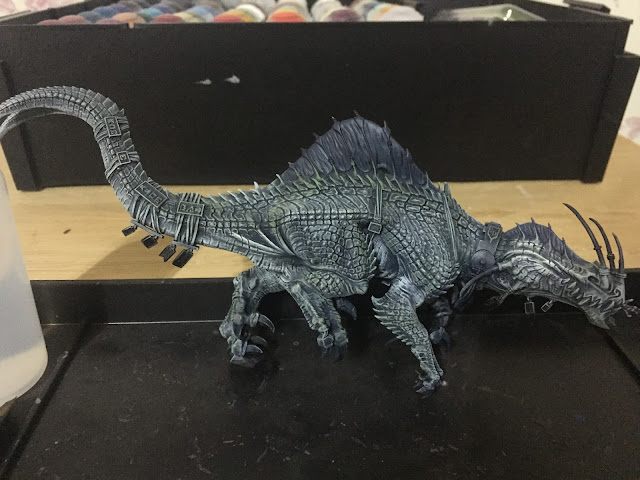 Then a focused dry brush of Etherium Blue and skin dry brush and highest details in Praxi White. I then done a glaze of Deathworld Forest on the Skin (this is done by watering down the paint a lot, if you have a dropper bottle, it is a paint brush worth of paint and 4 drops of water.) After this I drybrushed Origi Green on the highest points. 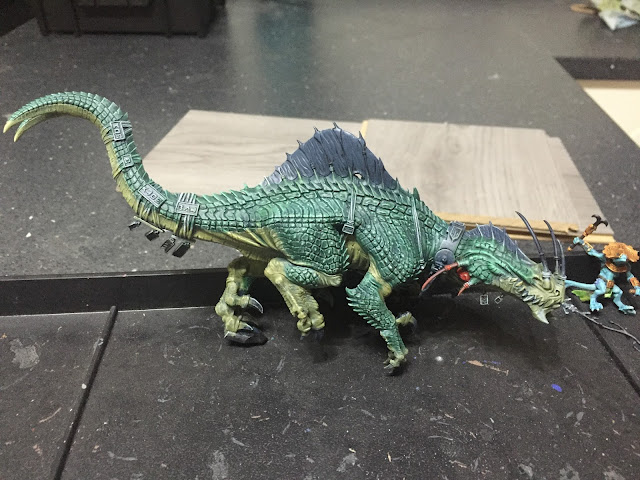 The Scales were glazed with Caliban Green, whilst the skin was still wet to help blend the colours together. 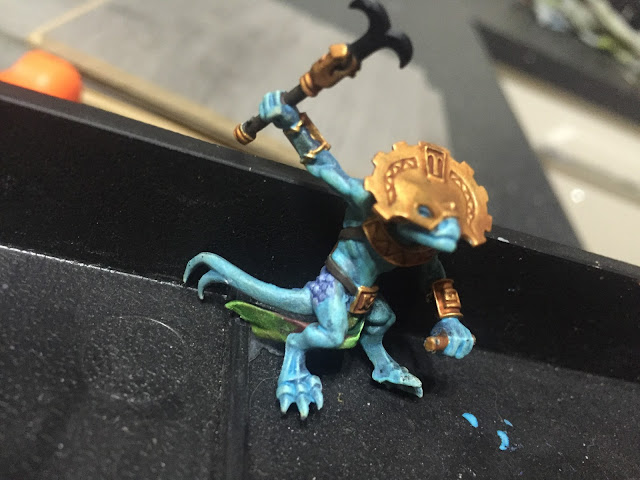 Skink Oracle was painted whilst I painted the Rippers as he was there on the table. There is a painting guide for the Skinks but basically it is (Stegadon coat, dry brush of Averland Sunset, dry brush of Etherium, Skin drybrushed with Skink Blue and Scales with White Scar, then glazed with Maccabre Blue on Scales and Temple Guard Blue on Skin, Gold is Retributor, Fleshshade and Necron Compund) 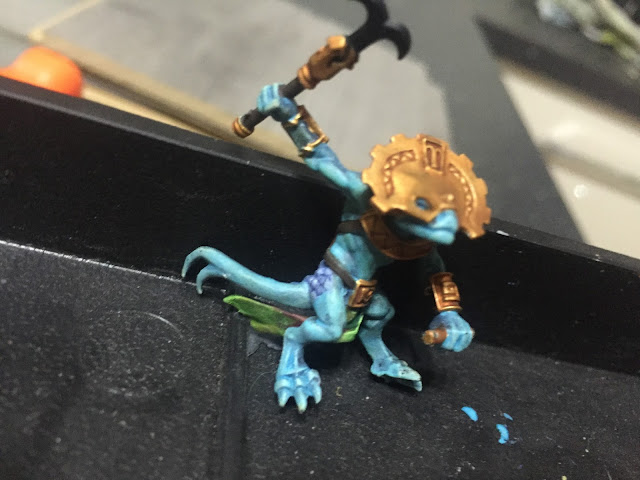 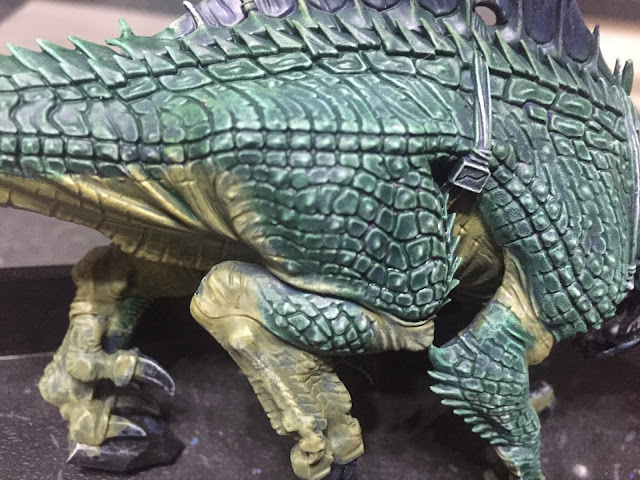 (Close up on Skin and Scales after Glaze) 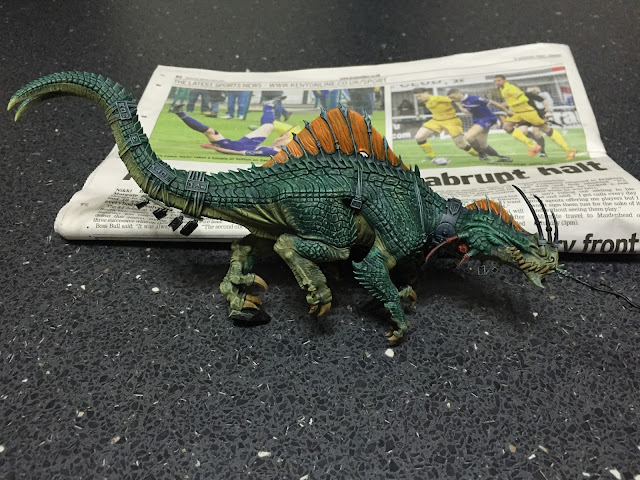 Onto the Fin, Drybrush of Etherium Blue. Then glazed with Troll Slayer orange twice (second glaze more focused to middle of fin, leaving the edges), then drybrushed with Fire Bright Orange. 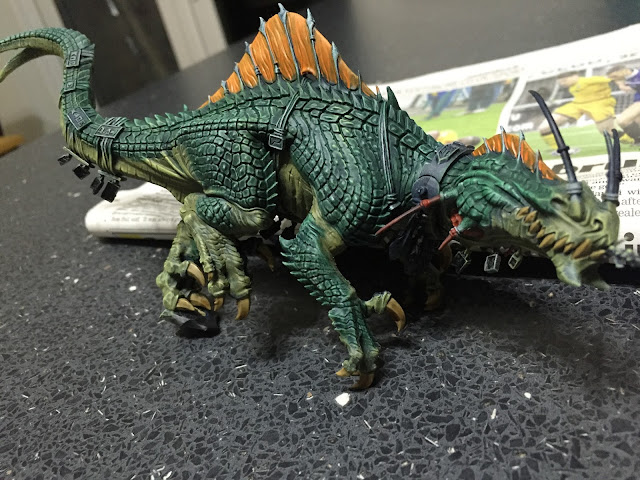 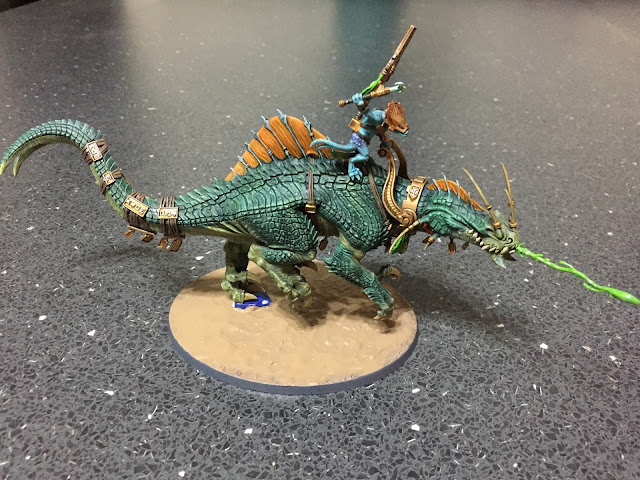 Finally as usual, I get carried away and forget to take pictures. But the rest is easier. Gold (Retributor, Agrax and Necron Compound), Ropes (Gorthor Brown and Agrax), Claws and Teeth and Spikes (Zandri Dust, Agrax, Ushabti) 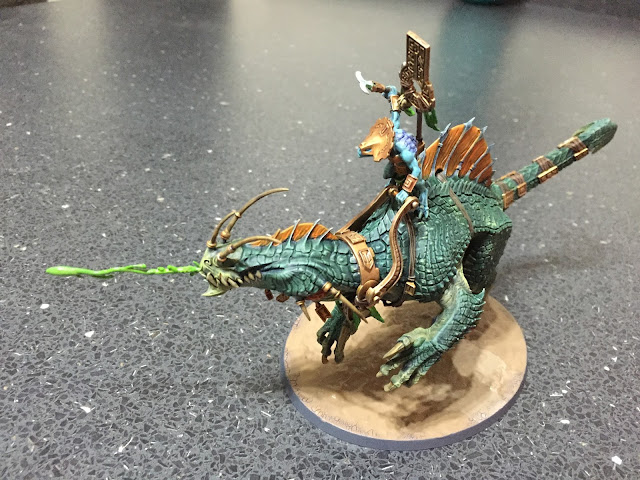 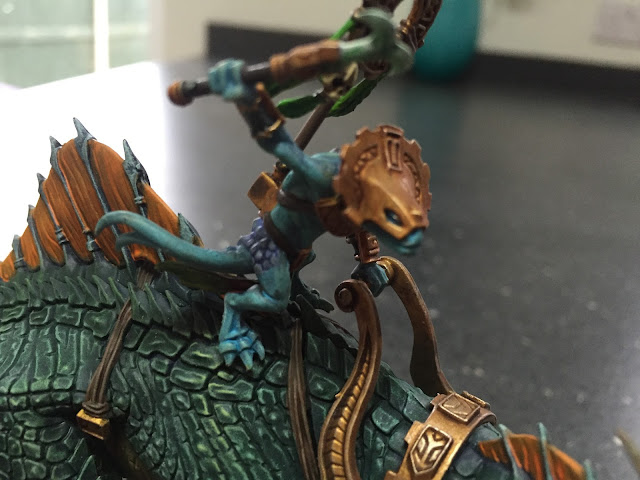 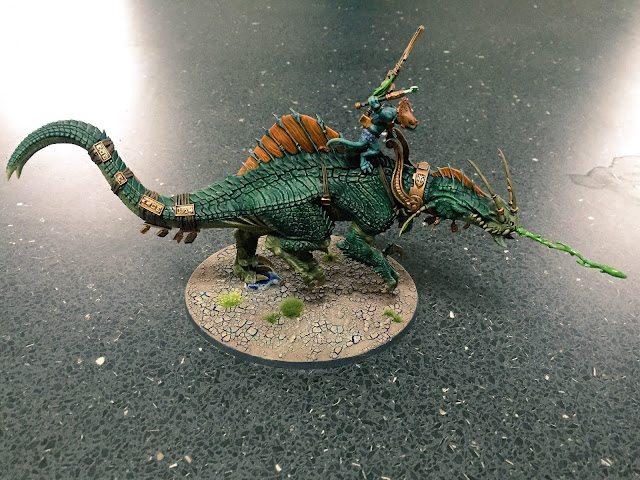 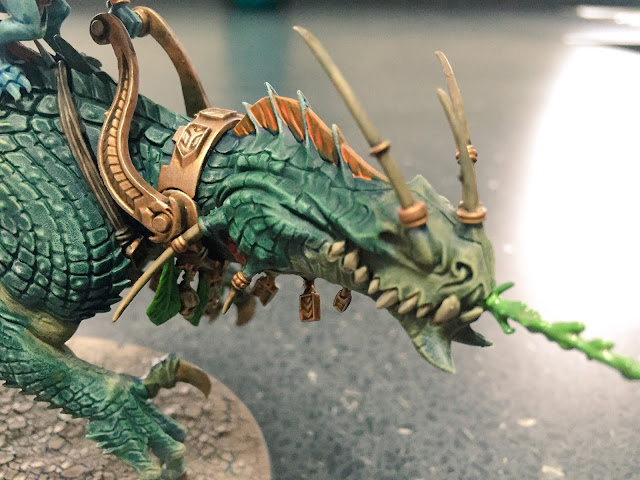 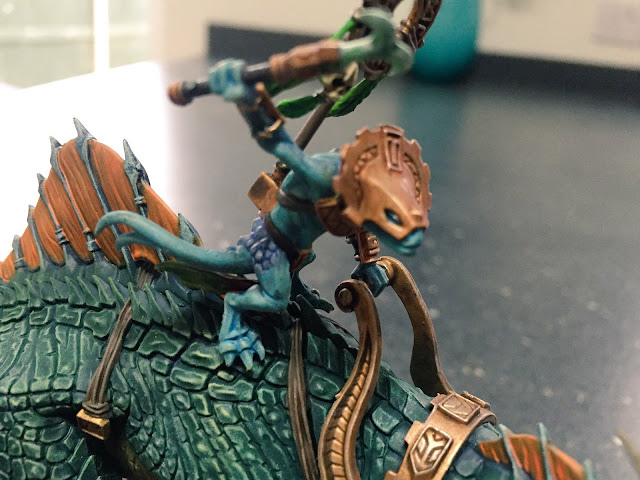 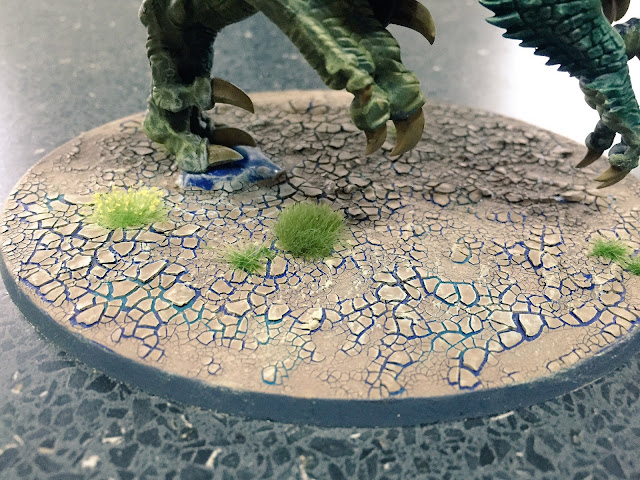 The Base follows the same principle as the rest of army. I will do a separate tutorial on this if you want to use it.

Thats it! A fantastic model to paint, Enjoyed every stage of it. Hope you liked the How I Paint on this.