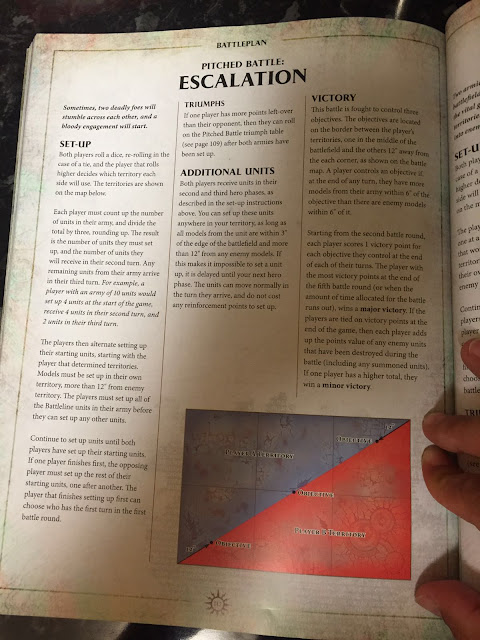 The board is split diagonally with three objectives along the middle line, you then split your army into 3 groups, the first group are set up from the beginning, the 2nd arrive in your second hero phase and 3rd in your third hero phase.

Who ever finished setting up first decides who has the first turn. You win the battle by gaining the most points from controlling objectives, to gain points you need more of your models within 6" of the objective at the end of the round. Scoring starts from the second battle round.

Your first group needs to be able to withstand the enemy until the 2nd group arrives, it also needs to be quick enough to capture at least one of the outside objectives if not both in the first round. Because it is units and not war scrolls that are grouped up, ensure one of your starting units is at least 20 models that can sit on an objective and defend it for the game. Ignore the middle objective for now.

Your 2nd group coming on should include all of your shooting, set your missile units up to defend the middle objective and objective furthest from your table edge, you can only set up within 3" of your table edge, but you can move in that turn as normal. Any other units that can't shoot place towards the closest objective to your table edge to help defend that one.

Finally your third group that comes on, can now be used to attack the middle objective, this is basically a decoy, you will probably lose this objective as your opponent will have already gained control, but now you just use your 3rd group to keep them busy whilst your main army takes the other 2.

I have played this twice now using this tactic and won both times. The trick I believe is not to try and gain all three but concentrate on just 2 other wise your army will be split too much.

Hope you are enjoying these new battle plans as much as I am, let me know if you have any other tactics or let me know your results in the comments below.
Posted by HobbyHammer at 09:30:00