Lock up your daughters, cover your cats ears and make sure your dogs are sitting down, I got to chat to the one and only, the great.. no, the honourable Ming! I wanted to showcase his amazing centrepiece model, his converted Daemon Prince and also wanted to find out a little more into the background of this mysterious character (i.e. Ming). I have also been given a huge exclusive for the upcoming Realms At War! So read on and get a little turned on as we delve into the mind of strange.

Sean: Ming, How the Devil are you?

Ming: I’m doing very well, thank you very much. Apart from the lack of time and a shoulder problem that’s stopping me from painting too much, but apart from that, life’s good and hope you’re doing well too!

Sean: How is AoS treating you?

Ming: I’m really digging the kits that GWs pumping out and really happy with the direction they took with the General’s Handbook, with guidelines and resources for Narrative play, which I feel is the natural playstyle for AoS.

Sean: So, the creation that is the Daemon Slannesh. What gave you the inspiration for this? What kits did you use to create it? 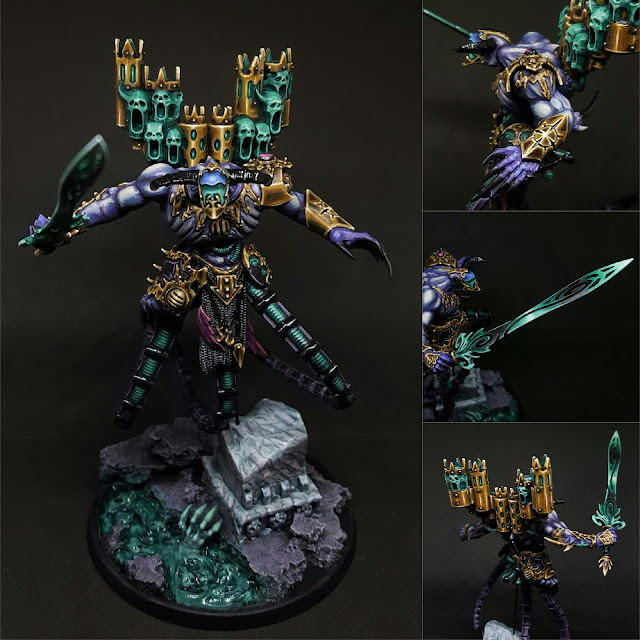 Ming: First of all, it’s spelled Slaanesh. The Dark Prince cares only for perfection, please don’t spell it like a celestial frog. Secondly, you should refer to it as Skrillexcious of the Cacophonic Choir ;)

Jokes aside, I wanted to use the aesthetic of a Cronos Pain Engine (with its smooth facemask & armour plates, contrasting against tortured organic flesh & mechanical bits) and translate it into a larger version suitable for a Daemon Prince or Keeper of Secrets. To distinguish it further, the Cacophonic Choir spell and the accompanying joke that one should blast Skrillex when casting it made me think of an Organ moulded into its back, screaming out discordant melodies.

I started off with the Daemon Prince kit (using the more 40k-ish front as it had a vent in the chest plate which looked like the music could also be coming from there), a smooth Face mask from the Cronos kit, and added Durthu’s sword to represent an Elegant Greatblade. The Maulerfiend kit then provided the rest of the parts, with tendrils to give it the floating effect and a gun casing to hide some bad GS work on the right hip (with a Hellstrider shield on the other). But the pièce de résistance has got to be using the exhaust pipes from the same kit together to form the organ. The tortured souls was a perfect fit and when I settled on the River of Souls basing scheme, it went together all the better.

Sean: Ok, so I can't spell..:) I love the contrast between the Purples and Green, how did you go about getting the zenithal effects on the skin? 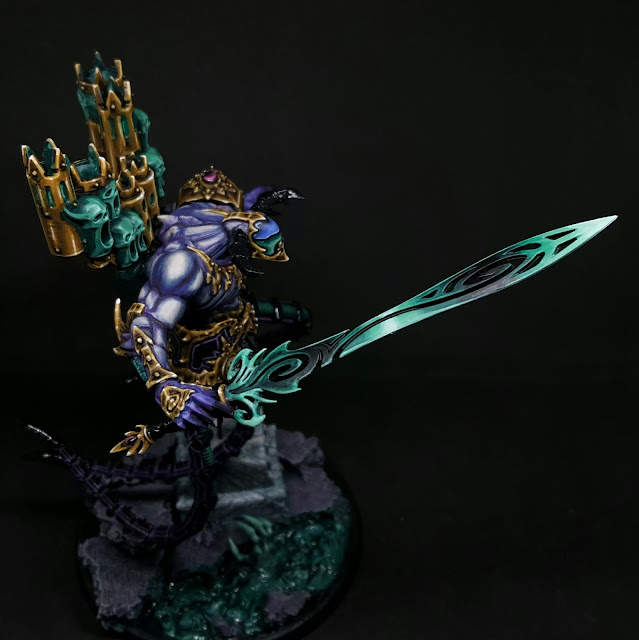 Ming: The triad of colours was something I feel worked pretty well, which goes to show colour theory is a useful tool when painting. For the skin, I wanted to try out the European style of painting which from tutorials I’ve read, mostly involved a white undercoat, and adding glazes of colour and shades rather than working lighter from a dark base (which is what I typically do). I didn’t achieve the exact results I wanted (painted too many layers that meant the end result was rather plasticky looking), but it was mostly adding glazes of blue towards the recesses, followed by glazes of purple the deeper it got, and then purple+black at the deepest shadows. I then layered back up with some greys (possibly Dheneb Stone or Rakarth Flesh) and white to tidy up.

Sean: And the marble piece on the floor, how did you achieve this?

Ming: Really simple actually, wish I took some pictures so I could offer a tutorial.
On an undercoat of black, paint in one direction streaks of thinned Pallid Wych Flesh. You’ll find that some areas are darker than others as the paint was thin enough not to coat completely, which adds to the effect. Go over the lighter areas with another layer or two, but make sure to leave the variation of colour. Then add black to the PWF, which should give you a nice mid to dark grey. Paint on thin lines, usually at the intersect of light and dark stripes. Paint thinner veins branching out. You can then use pure black to line certain veins as though they are closer to the surface.

I also like to glaze areas of the model with thinned white, which adds to the varying depths in the marble. To tie it in with this specific basing, I glazed on some Coelia Greenshade randomly. Finally, to finish, I applied lots and lots of gloss varnish, but not on the broken area. (It’s been pointed out to me that broken marble would not the usual patterning of polished marble showing, but I chose to forego realism with what looks better due to the angle of the model.) 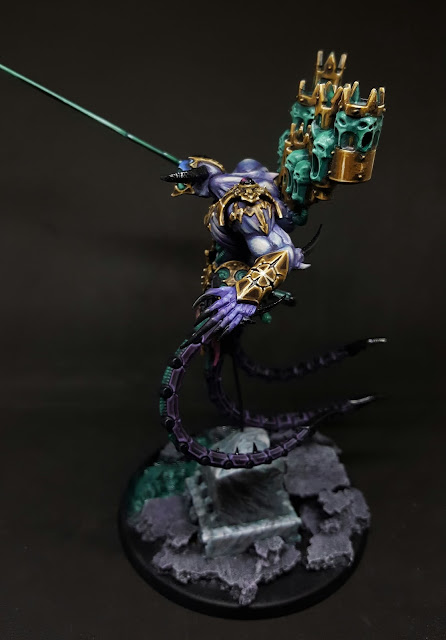 Sean: What new techniques did you use/gain when painting this miniature? 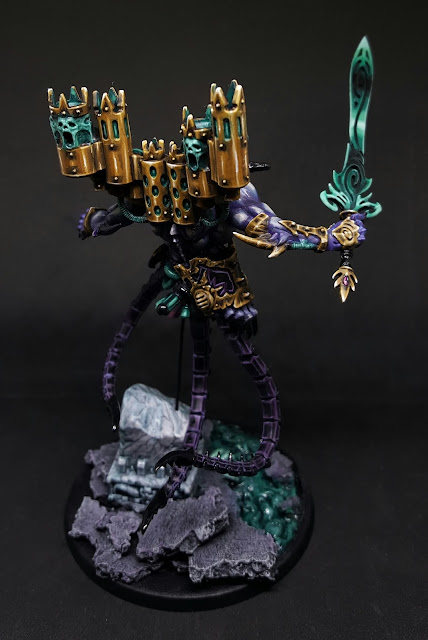 Ming: Apart from the different style on the skin, I guess I levelled up a bit on my gold NMM ever so slightly. But the area I improved the most has to be on conversions, as my previous army had almost none carried out.

Sean: How is your Slaanesh army progressing, I know you went through a period of not painting a lot, has this model given you the oomph to create more? 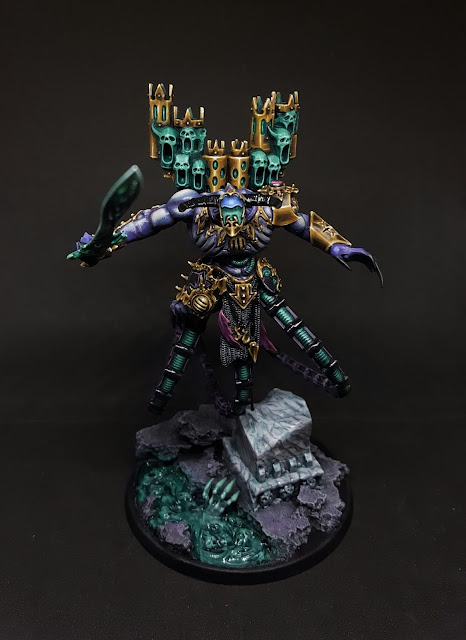 Ming: Haha, sadly not. In fact, it’s put me off painting this particular army at the moment – I blame my missing god for that #seekingslaanesh I am however, furiously building and painting a Tzeentch army. And by furiously I mean by my standards, which is more akin to a duardin than a steed of Slaanesh.

Sean: How did you get the blending so smooth on the Sword?

Ming: Thinned layers, practice and patience? A flat large area like this is the perfect medium to practice blending. And no, I didn’t use Lahmian medium. And it’s not really that smooth.

Sean: Looks smooth to me! Onto yours and EATBATS little baby, RAW16! I love the idea of growing an aspirant into a legend, really great way to play narrative gaming. How is the preparations coming along for the event?

Ming: You’ve missed Steve out there! Officially we are EATMingsFoote, rulers of the Narrative Galaxy.
Preparations are coming along very nicely. We’re busy making terrain, hitting up sponsors and affiliates, writing up the storyline and scenarios, and still coming up with little ideas that would add to the uniqueness of the event! My main task though is to keep everything under control and not spiral into an unachievable, unaffordable mess. It’s hard to curb enthusiasm though!

Sean: I’m really looking forward to attending the event, this will actually be my first AoS event outside of our club. In a nutshell for people who haven’t heard of the event, whats it all about?

Ming: We’re really grateful for the enthusiasm we’ve received from people like yourself. I hope to see more narrative events being held in the UK, just like yours next year!

In a nutshell; RAW16 is a narrative event involving 6 games of varying sizes (including a doubles game) where players assume the role of an Aspirant who evolves over the weekend to reach Legendary status. The Aspirants are represented by 4 custom warscrolls and we hope to see players model a custom miniature representing both the Aspirant and a Legendary version!

The storyline, alliances and the various realms would all feature heavily during the weekend, and we’re working hard to come up with lush scenery to give an ideal backdrop for you to weave fantastical stories of your own. At the same time you’ll get to compete for numerous awards and hang out with some of my favourite people in the scene (nope, I’m not namedropping anyone in particular).  The best way to find out more would be to read the pack itself or check out our teaser trailer.

As at the time of writing this, we’re full now but looking to start a reserve list for the usual dropouts that occurs. So if people interested in narrative play are free on the 18th-20th November and would be able to get to Cambridge, do sign up!

Sean: Is there anything you can say that people will not have heard about yet?.. Yes.. I am fishing for an exclusive!

Ming: Since you’re all about Battleplans, here’s the first battleplan for you!
This battleplan also comes with a Realmgate variant warscroll, which I’ve used as a simple mechanic to get players during the event from one Realm to another between Game 1 and 2. 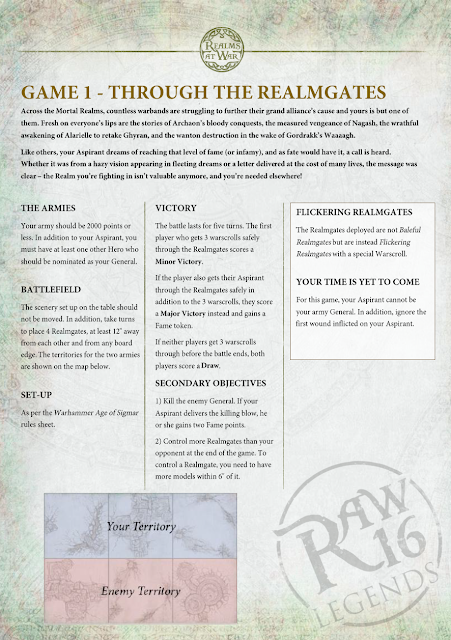 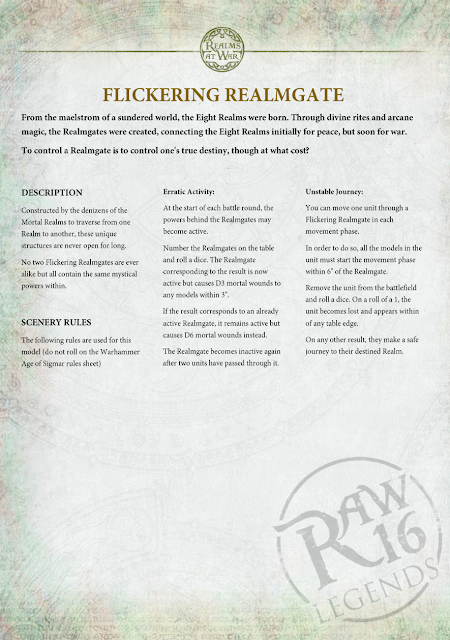 Sean: Sweet, this looks amazing, and if this is anything to go by, bring on the Narrative!!
Onto yourself quickly. Do you get to play much AoS in your area?

Ming: Sadly not. Two main reasons, I currently have little free time due to personal life getting in the way and the fact I don't actually have an army to play with!
However, I hope to change this soon, and hopefully I’ll be extra pumped after watching everyone push toys around at RAW!

Sean: If you could pick one thing for GW to improve on, or spend more time on in the next year, what would it be?

Ming: Bring Slaanesh back with a whole host of sexy toys. I honestly can’t fault what they’ve been doing recently, so hopefully they keep it up and continue to listen to the community.

Sean: Anything you want to promote or encourage?

Ming: More people like yourself to lead the charge on Narrative play. AoS has seen more players come to the game with an open mind and possibly less focus on the competitive side, but there’s still not enough Narrative events out there.

Hopefully once we gather all the resources and tools into one place, it could help budding TOs have a leg-up and start organising events of their own. As you are clearly aware of, the sheer depth and additional work usually required in moving past a Pitched Battle system is not to be scoffed at and is probably the biggest reason that dissuades TOs. It's just a start, but if people are interested, let me know here or on Twitter! @Thornshield

Sean: And finally, Bacon or Sausages?

Ming: Bacon. On a pancake with maple syrup. Sooo good.

Sean: Thank you Ming for your honesty and great work! Look forward to meeting you in person soon!

Ming: My pleasure, thank you for featuring my work and equally looking forward to meeting you soon!
Posted by HobbyHammer at 10:00:00