Game 2 was against Simon Roberts (@simonroberts87) and his Grots! A smaller game at 1200 points and this time on the Realm of Ghyran Skyoak table. This game was so much fun, I love playing the Moonclan and their shenanigans. I was up against 80 Grots, 5 Fanatics, A shaman, his aspirant and a Magma dragon.

Straight away as soon as the Magma Dragon was placed I knew Reggio's goal in this game. He would become a legendary Dragon hunter and kill that thing. I had a secret Alliance objective too of killing his General who was his Aspirant. Set up was 12" around a Realmgate and 12" away from enemy deployment zone and you had to search for fragments hidden in Terrain pieces. 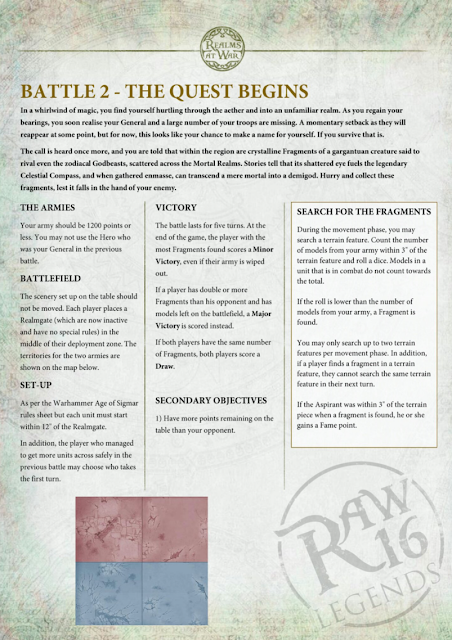 As Reggio came through the Realmgate and into the Realm of Ghyran, he was straight away all to aware of the mountain sized tree to his right, he also soon became aware, his General Elron was nowhere to be seen. Reggio gathered his troops who had made it through, he had heard of this place and knew of the fragments everyone was searching for were buried around the area, he sent his Men-At-Arms and peasants on the hunt for them.

Suddenly a great WAAAAAGGGGGHHH could be heard, he looked up to see a horde of Moonclan emerging from the opposite Realmgate, but this was not just Moonclan... a gigantic Magma Dragon also emerged. Reggio's eyes lit up as he dreamt of how much Fame could be earned from killing this beast. 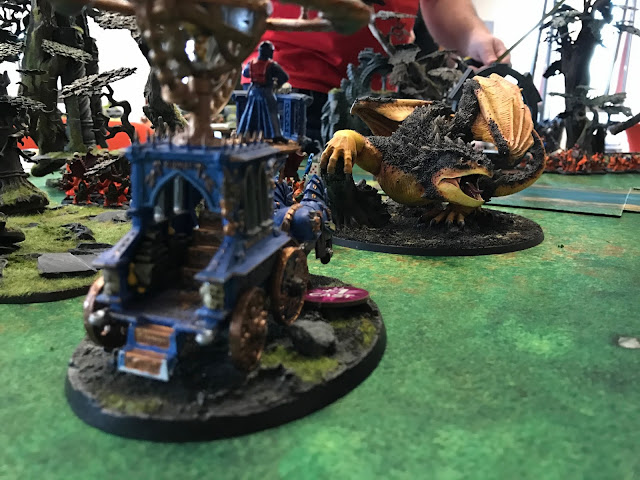 The last to emerge from the Enemy Realmgate was their Aspirant, he quickly ordered his Luminark to fire up the Searing Beam and within moments it shot out across the battlefield hitting the Grot Aspirant square, sending him back through the Realmgate from whence he came. Reggio ordered the charge from his Grails and keeper the Men-At-Arms back to search for the fragments. 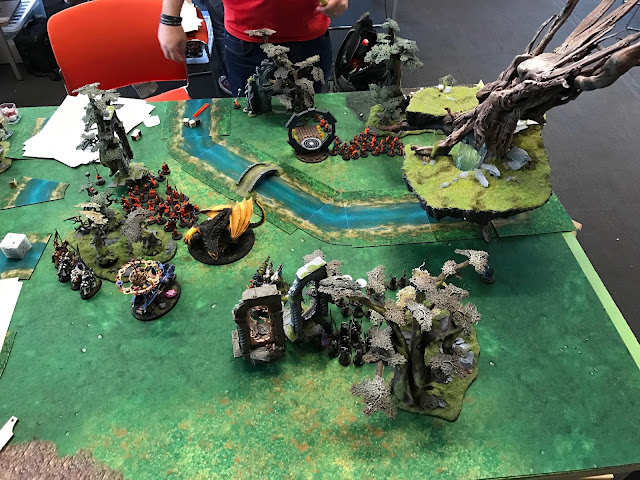 The Magma Dragon charged across the field and met the Grail Knights, the Life Surge of the area though inspired the Grail Knights, they were close to their beloved lady and fought with honour and strength, halting the Dragon. A cry was heard from Reggio saying 'He is Mine!' but before he could reach the Dragon, he was halted himself. He ordered the Grails to retreat and search the nearby forest for more fragments which allowed the Dragon to set his eyes down on Reggio and charged in. 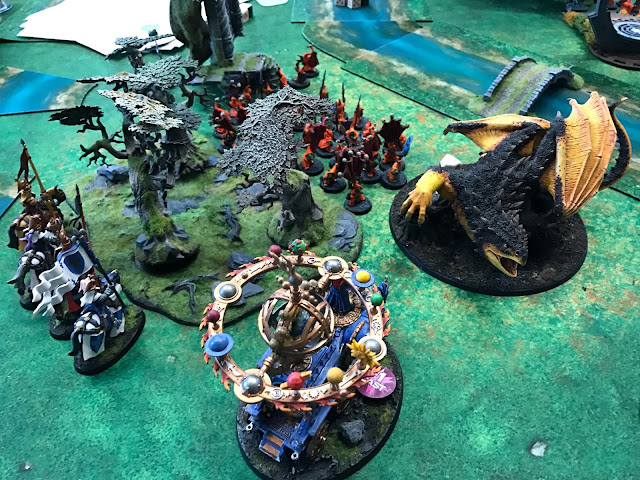 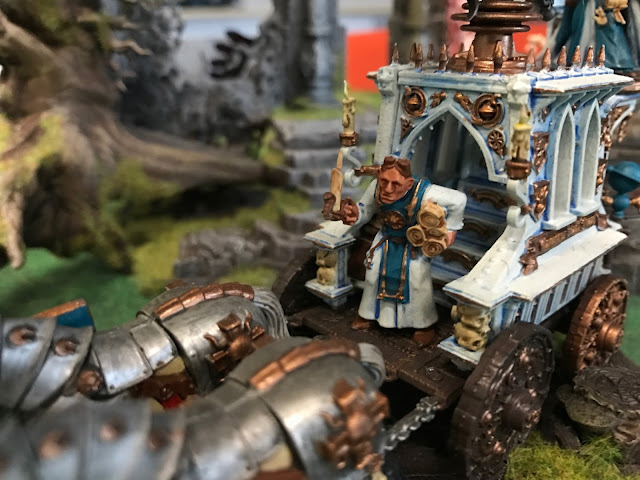 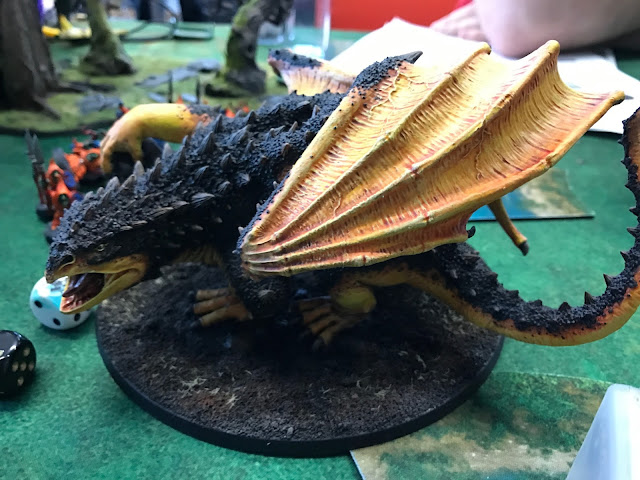 Reggio got some damage done, but could not quite find that killing blow, he was swept aside by the lashing tail and found himself pulled back by the Realmgate, he vanished into the swirling vortex. Seeing this, it was the Acolyte in the Luminark who charged the dragon and with his Arcane Tools, let atop the beast and sent his knife into the open neck of the beast, it dropped down and let out its last boiling breathe. 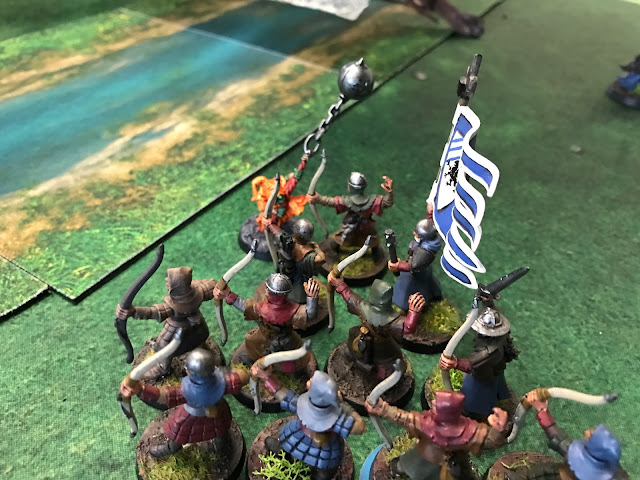 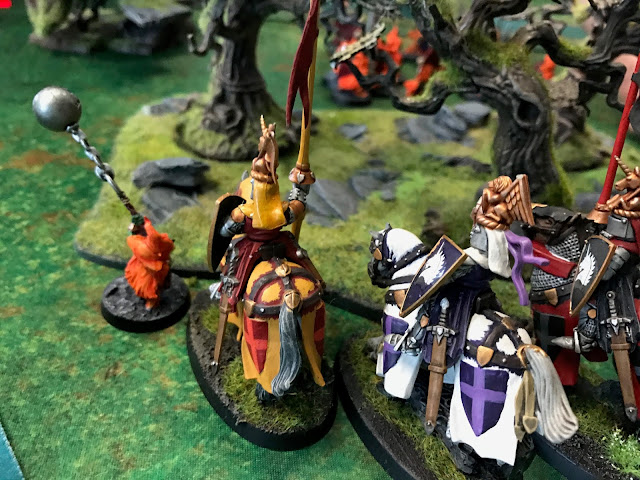 The rest of the army marched upon the remaining Grots and sent waves back to where they came, gaining the advantage in the shadow of the Skyoak, many fragments found, they headed their was back through the gate in search of their new leader.