The third game was a doubles Coalition game, I was teamed up with Andy Talbot off Age of SigBrah and was against Jayson and Andy Burton. This was Stormcast and Free Peoples against Skaven and Khorne! 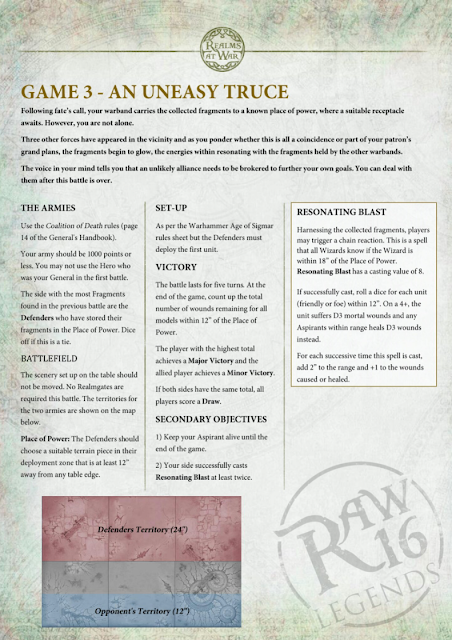 The idea I think was to protect the artefact located in our deployment zone whilst wiping the enemy out. We set up with the Stormcast defending the artefact which allowed me to set up in front and go do what I love to do, charge! I wasn't until the 3rd round I realised my own team mate Andy played me, he was happy to sit back the game and gain the major Victory and use his Stormcast to buff my Knights up. Heraldor and Brets are a dirty mix, the Heraldor allows the Knights to retreat and charge in the same turn.

It was an epic game and probably the most tactically game I have been involved in. It was an eye opener to another way of playing AoS. I watched the other three on my table spend time deciding on their deployment, spend time ensuring movement is perfect to gain max distance whilst still being in buff range of things. These were tournament pros and I was sitting drinking rum with the one idea in my mind... Send Reggio out to gain more to his Legendary status! All the armies were beautifully painted and the game was played on the Shyish ruins board so looked amazing all out together. 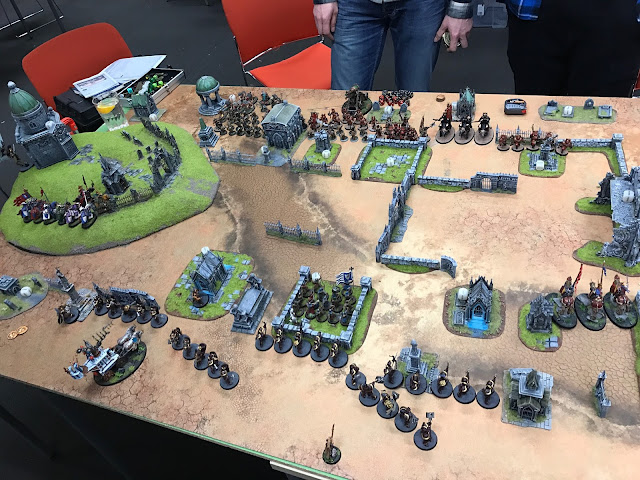 There was two standout points in the battle (both with earned me a lot of fame), the first was when I twigged Andy Talbots tactics, he had many units around the artefact, too many for me to play for the Major Victory, but he had no wizards and I had 3. I decided to go for some secondary objectives instead, one of which was to set off the artefact, this would have caused D3 wounds to all his units. Andy and Jayson on the opposing team were so up for me doing this, they offered me 2 fame points for it. Luckily (for Andy T), Mr Talbot had more to give, so he offered me 3 not to do it. I duly accepted and instead buffed up Reggio, who was standing in the middle of the battlefield against a tough as nails Khorne Aspirant. I waged with Jayson, owner of the opposing aspirant, that although Reggio had 1 wound remaining and it was his turn to attack first, Reggio would still kill his aspirant in one round of combat. The odds were completely against Reggio so Jayson accepted without hesitation, 4 more fame tokens were up for grabs to the victor. 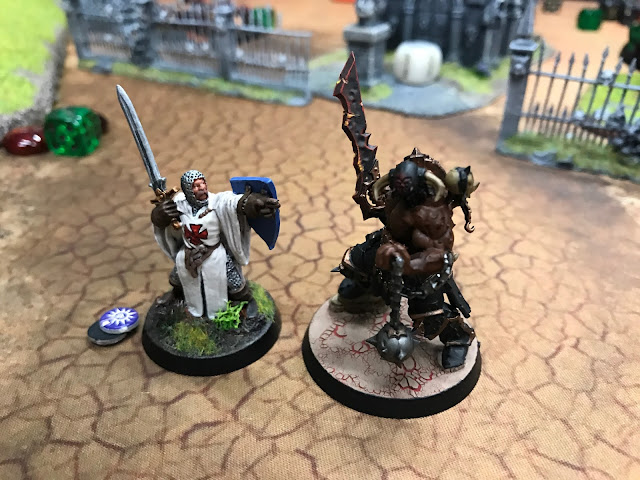 Jayson went first, activated his ability to allow all wounds he caused to cause mortal wounds. He fluffed most of his attacks, the ones that did get through were saved by 6's on the Aspirant parry saves! Reggio attacked back and rolled very very well indeed, slicing the Khorne aspirant down without even having to use his secondary attacks. He did not stop here though, he ran over in his next turn and killed a Grey Seer and still enraged, run over next turn and killed the Khorne Lord too! He earned his strip in this game.

The game ended with Andy Talbot gaining the major, me the Minor and tabling the opponents.
Posted by HobbyHammer at 08:59:00