'How I paint' Series: The Great Green Torc

Welcome to my most ambitious project to date! For the upcoming Realm Hoppers Event on the 18th February in Margate, UK I wanted to have a centre piece terrain sculpt that is iconic in the AoS world.

I have read through Godbeasts and my favourite part was the section in the Realm of Ghyran where they were fighting over the Great Green Torc, a huge floating isle which had its own seasons and climate, accessed through an umbilicus Realmgate, this Torc happens to be a necklace for Behemot, the world Titan and Archaons prize.


I decided early on that the size would be close to 3' x 3' with a platform width wide enough to fit the largest of monsters should anyone decide to go up there. Below is the early sketch idea I had. 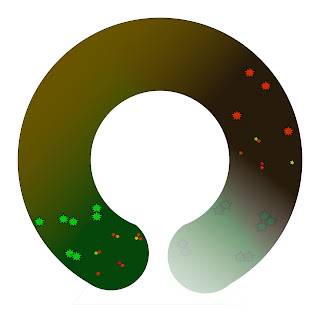 I was lucky enough to be given a 4'sq piece of blue foam and so drew out the shape and cut it out with a jigsaw. 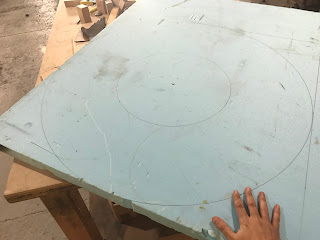 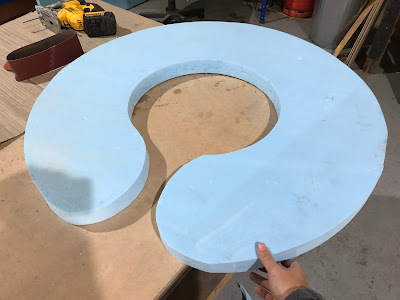 I used a hot wire cutter to shape the rock formations on the underside and also the three large rock pieces that attached the Torc to the floor. I grabbed some cylinder acrylic pipes and put it all together. 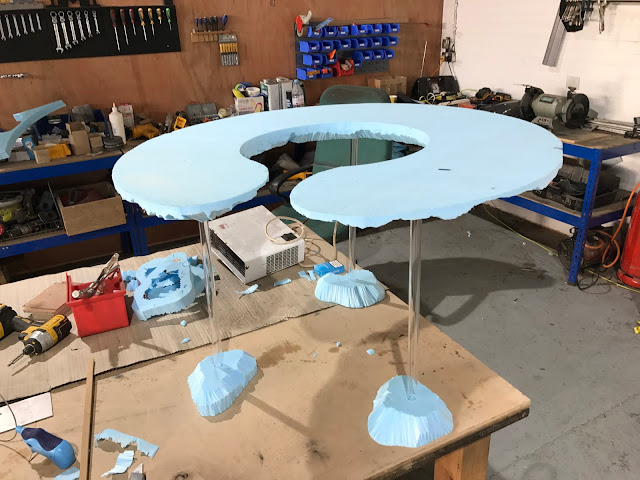 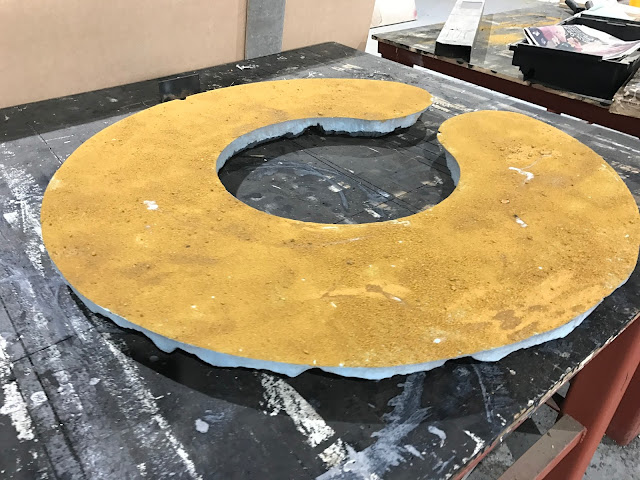 I sanded the top of the Torc to give it some texture, I used regular sharp sand and PVA

For the base, I needed something solid, so I cut out a 3mm ply base and glued the large rock foundations down, again I sanded this base, leaving the centre part to create a pool later on. 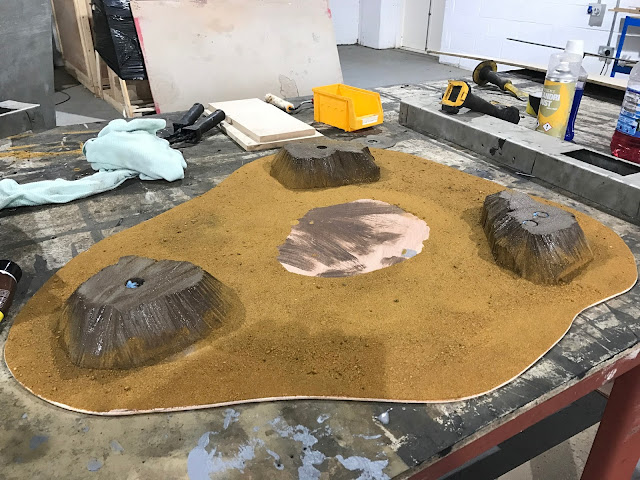 I gave all the foam a piss coat of cheap acrylic paint and PVA, this seals the foam to ensure it doesn't melt when you apply sprays. I then sprayed the rock with Mechanicus Standard, the sand with Mourning Brown and the pool with Maccrage Blue. I followed this with an all over (rock and sand) drybursh of Rakarth Flesh and Tyrant Skull. 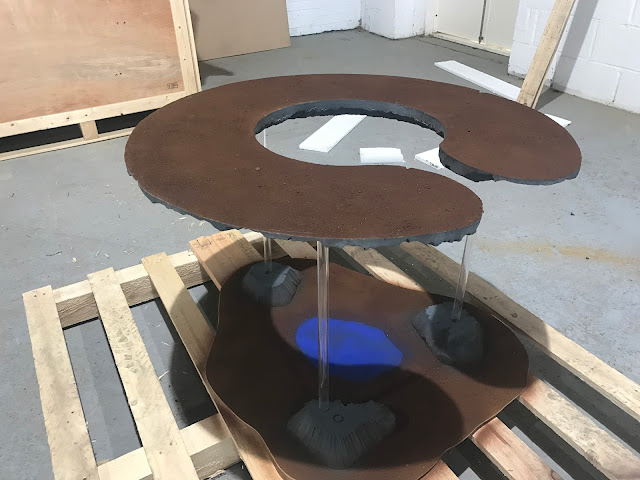 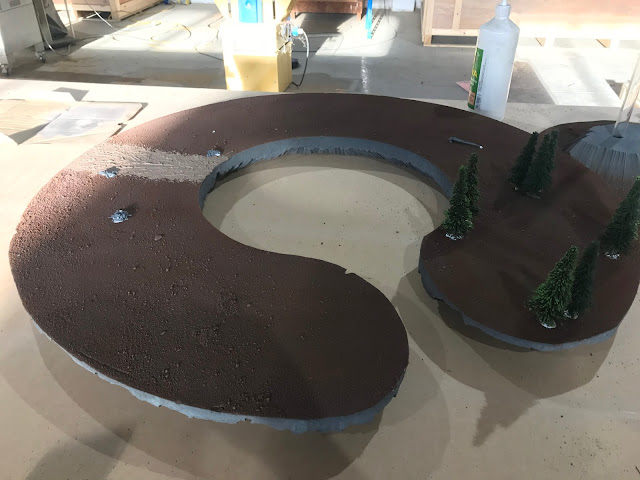 I started placing some battlefield debris and Trees and also used a whole pot of Agrellan Badlands to begin the desert (Summer) part of Torc. 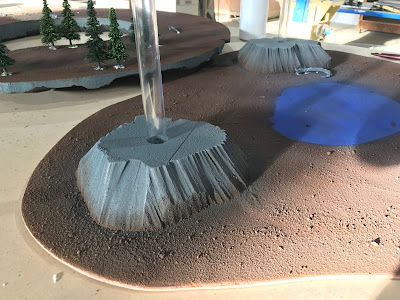 (Close up of the Rock Foundations)

I was keen to start flocking, I had spent a few weeks on it by now and wanted some progress. I attached some spring trees and Heavily flocked the first quarter but blended this out (adding in more and more deader looking grass) until it reached the summer quarter. I grabbed a couple of Agrellan Earth to add either side of the Badlands and finally some Dark Earth to add to the edges. 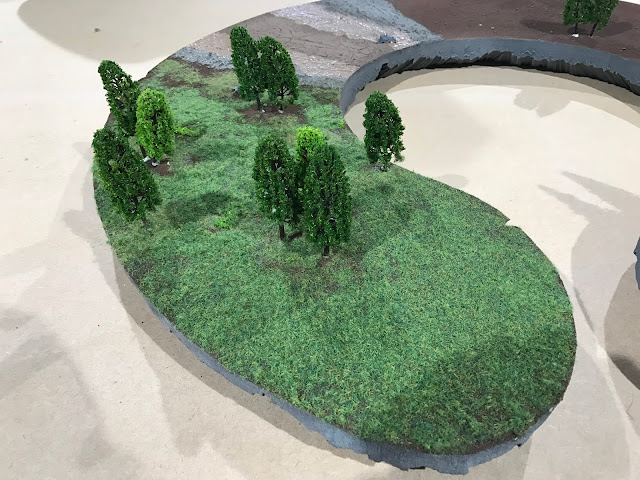 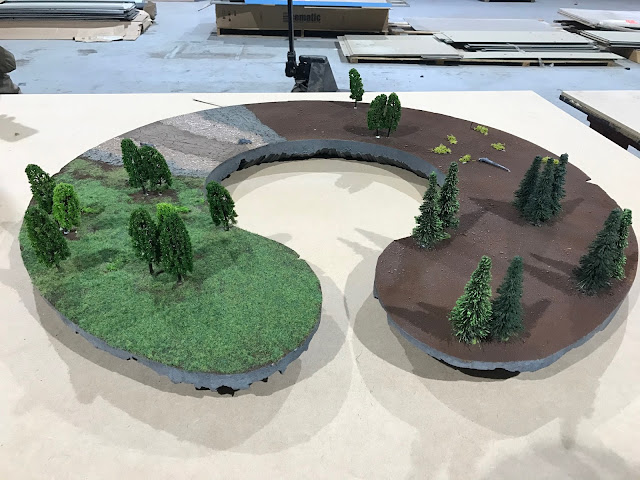 (After adding a few more tress)

I blended in the desert sections using  more Mounfang Brown spray and an all over dry brush of Rakarth Flesh, I also added some ruins and of course more flock for the autumn and winter sections. Again this was blended up with more and more dead grass as Winter approached. 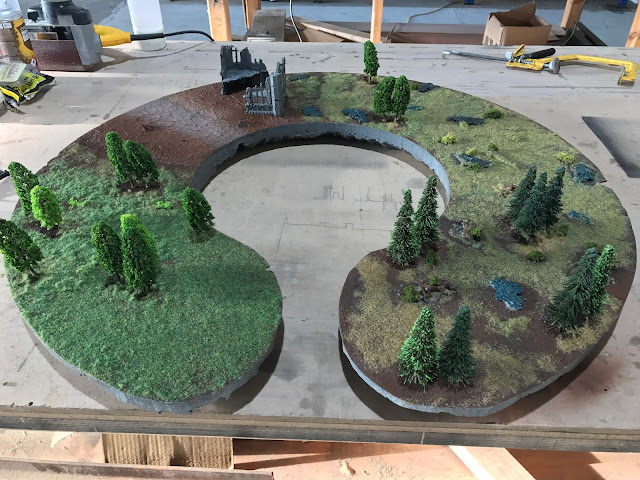 For the pool at the bottom, I grabbed some Milliput and outlined the pool. 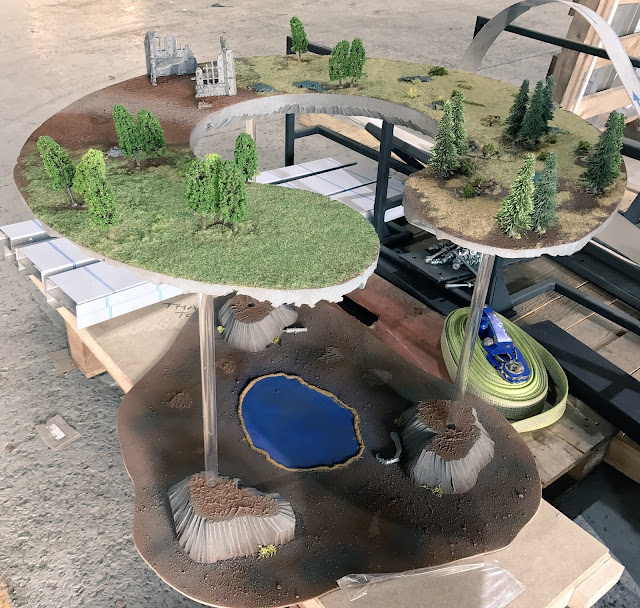 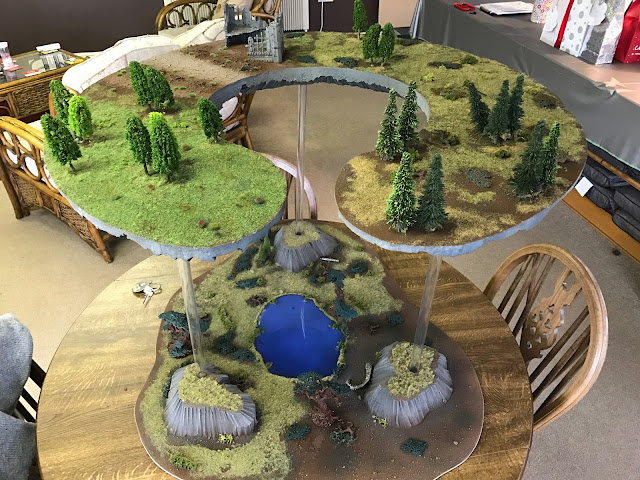 I began the flocking of the base and added some Citadel Trees too. 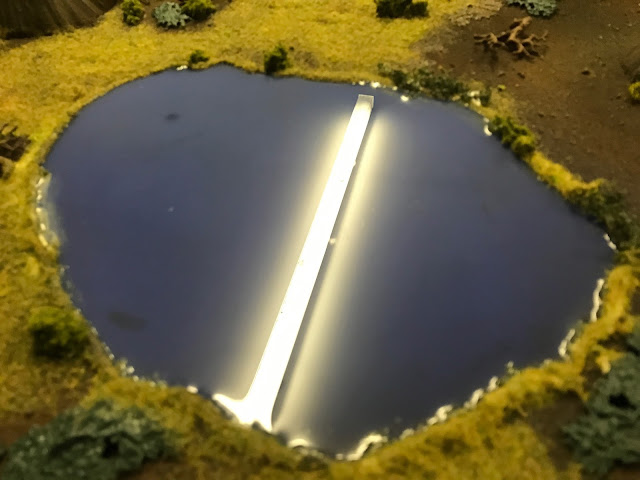 The next stage was the snow effects for the Winter quarter of the board. For snow I use Precision Ice and Snow Krycell, I love this stuff as it allows for build up of snow, perfect for the transition on this from autumn to winter. Please see previous posts for tutorials on this. 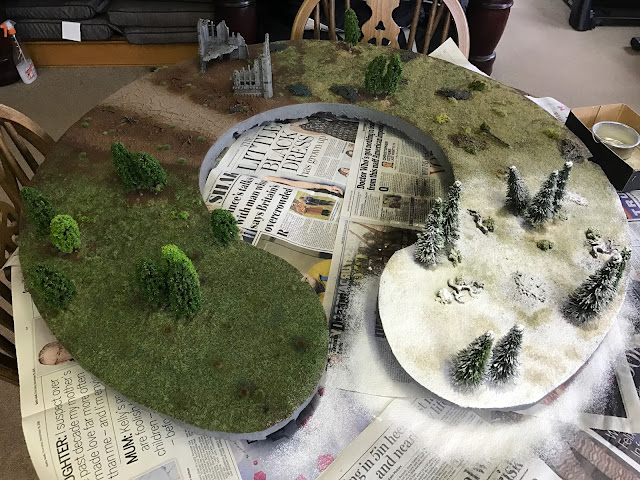 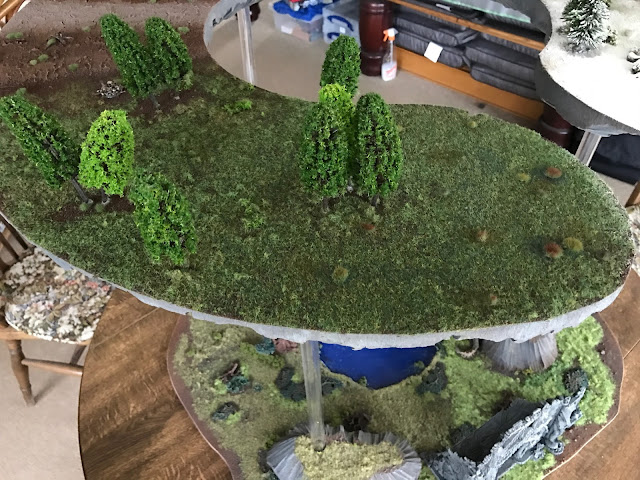 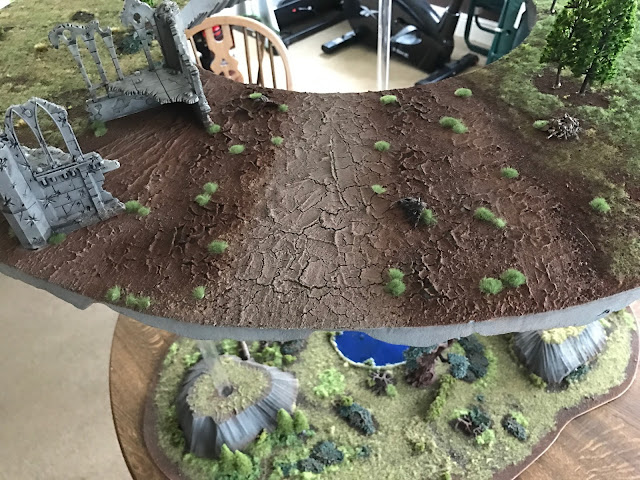 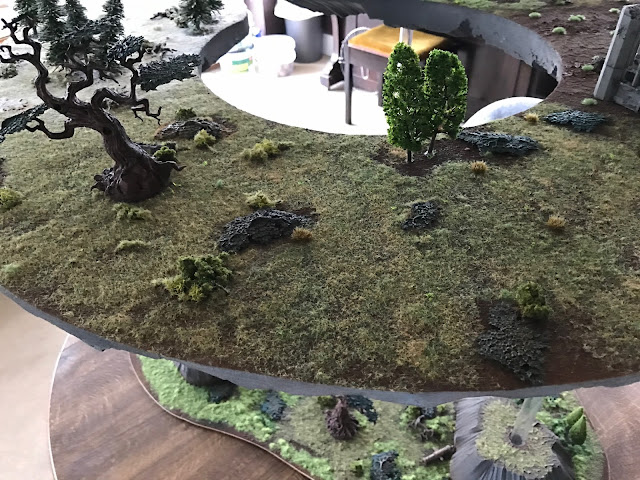 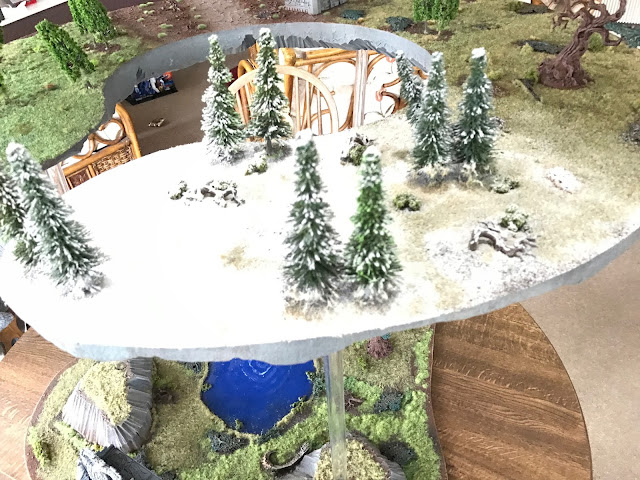 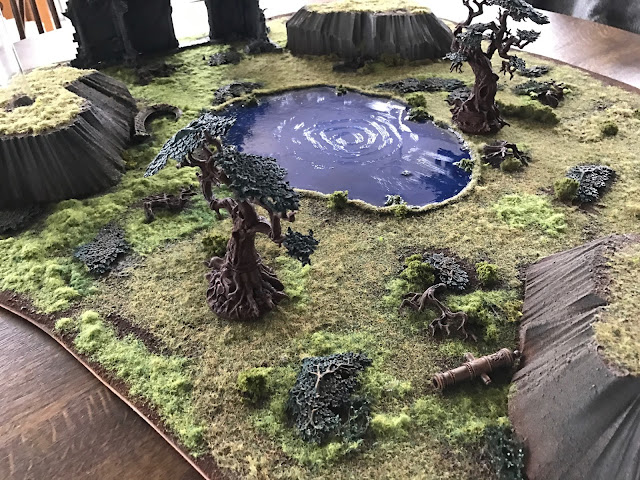 Added in some ripple effects on the pond and finished off the base too. 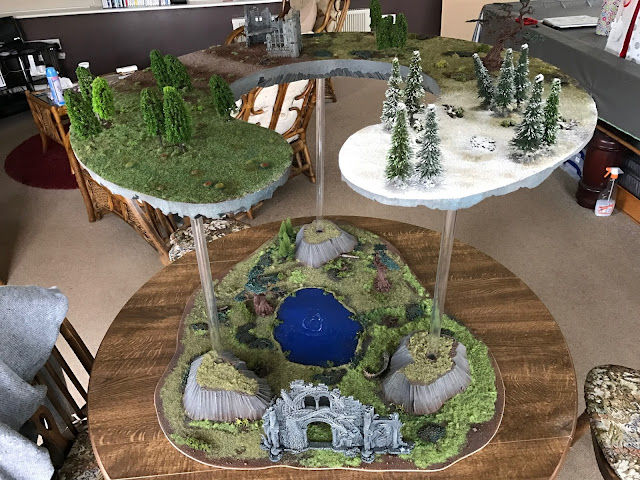 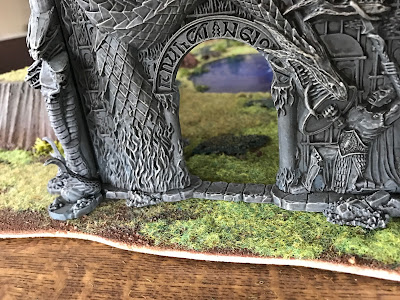 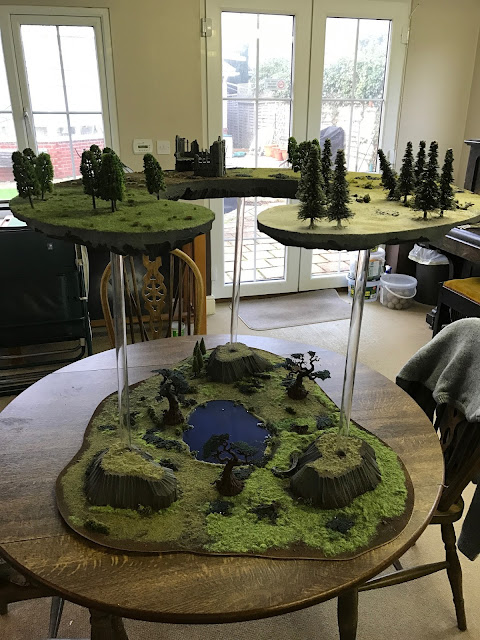 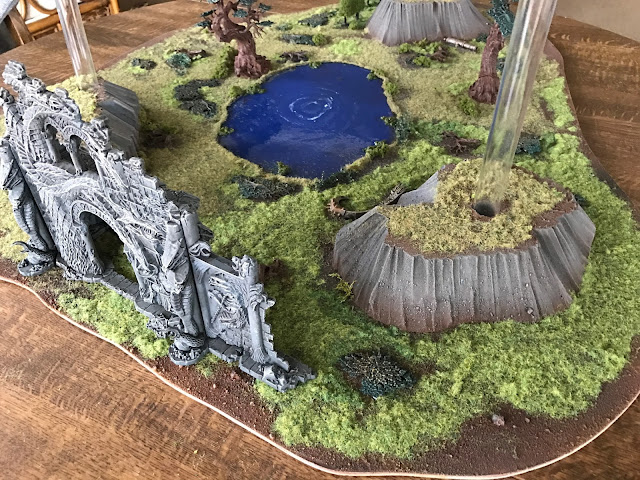 There we go. Done.