Welcome to my review of the latest AoS novel from Nick Horth, A Legends of the Age of Sigmar book, City of Secrets. This was in line with the Games Workshop release of Tzeentch and the new Disciples of Tzeentch battle tome. This was one book I could not put down and below is a small review of what I thought. 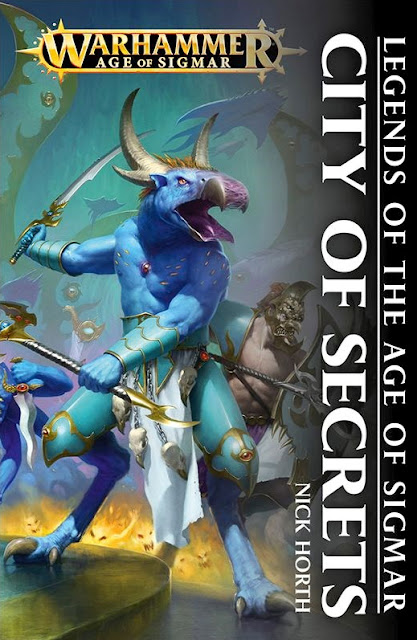 The Story is set in the city of Order 'Excelsis' in the Realm of Ghur upon the Coast of Tusks. This is the first time in an AoS book we have not had the Stormcast Eternals as the main army and instead it centres around the Freeguild who have been tasked with patrolling the cities and keeping them in order. It is also the first time since the Season of War we have got to see the ins and outs, dodgy dealings and dirty street level views of an established city in a Mortal Realm.

It is split into 3 acts and is pretty short in terms of content, but what content it has packs a punch. The main characters Callis (A free guild guardsman) and Toll (A badass Witch Hunter) are fleshed out nicely and you really get a sense of their purpose in this book. The novel opens with a free guild regiment out on their nightly patrol, it gives you a great sense of setting with rain beating down, overflowing sewers stinking the slums of the city close to the harbour which is controlled by a band of Scourge Privateers. Going about their daily routines, they stumble across what they thought were just shady back alley dealings but instead is a path down a very deadly road. Callis is the only survivor from this and is quickly blamed for the death of his fellow men and women, and so is now a fugitive.

It details his escape (well by escape I mean being pulled down the streets by a rampaging flathorn on top of a cart full of strange glowing vases) from the fight and during this he is exposed to the gases of some strange substances. He sees visions of the city burning to the ground amongst other things. He awakes in a dark room, cut and bruised to within an inch of his life.

This is where the introduction of Hanniver Toll and his Duardin sidekick comes in. They are members of the Order of Azyr, a faithful group of men, duardin and aelves tasked with keeping the order and hunting the enemies down, basically bad ass private detectives. The have extreme power even over the Colliegate Arcane, Freeguild and others. He is portrayed in the book as a sort of Assassin, mainly living in the shadows and striking from such. He discovers the stories of Callis and that night and can see things do not add up and so he seeks him out. This is where the story really gets going!

City of Secrets is a major change to how AoS books have been written in the past and I for one, loved it! It gives you such a sense of being in the Realms, what it is really like to live here, The Stormcast are hardly mentioned at all, in fact they are not even in the city at the time, they are off fighting an Orruk force in the badlands. There is however a scene which is actually my favourite, Callis and Toll visit the vast Storm Tower (A tower built to house the Stormcast) and a Lord Veritant appears before them, it goes into great detail about just how much the Stormcast appear like gods to mortal men, it affects Callis just to look upon him and in fact, just a judgement from the Lord on Callis nearly kills him bringing every emotion and act of unkindness the surface of his mind. I much prefer seeing the Stormcast written in this sense rather than first person. It also begins setting the tone for some sort of hierarchy and for want of a better word, racism. It says how the Natives of Ghur, those descended form the tribes that survived the Age of Chaos are looked down upon by the Azyrite descendants, those descended from the civilians looked up in the Realm of Heavens during the Age of Chaos. It is a great addition to the fluff and I look forward to seeing how this will play out in future books.

I would definitely recommend picking this book up, or recommending this book to those who still haven't got into AoS due to the high fantasy aspect (and loss of The Olde World), this really does get down and dirty with city politics, but also still gives you aspects of High Fantasy too. (The ending is out of this world!). I believe this could be the start of the adventures into the other more mortal races of Age of Sigmar. Devoted of Sigmar... here we come! Oh, I said too much.

You can download the book by visiting http://www.blacklibrary.com/aos/whaos-novs/city-of-secrets.html
Or you can buy the hard copy (with 20%off!) by visiting: Element Games - The City of Secrets
Posted by HobbyHammer at 09:43:00