My story continued from the Herald of the Storm, the War Council in that previous battle managed to secure the 4 altars to open up a Realmgate. The Wanderers Host could not stop the shear force and brick like nature of the army. The army have now found themselves in Chamon, a huge building stands in front of them. Artur Sigi, the BattleMage upon the two headed Griffin, fell and has been badly wounded. The Jade Wizard, Frieda spent a long while healing him back up but has now been left too weak to continue, in her place, the warband has been joined by a Gold BattleMage dispatched from Azyr to aid them further. This building must be held and controlled, but fate is fickle and the great illusionist has cast his magic upon the whole area, nothing is what it seems.

In front of them, the see a huge host of what they think to be Orruks, in reality, it is all fake, the Orruks they see are in fact a host of Stormcast sent on the same mission by Azyr. But with the vale down, the War Council sound the war cries and charge on to attack! The Stormcast also have been tricked, instead of allies they only see Tzeentch Arcanites in front of them, they too send the message to form into attack formations. The stage is set. 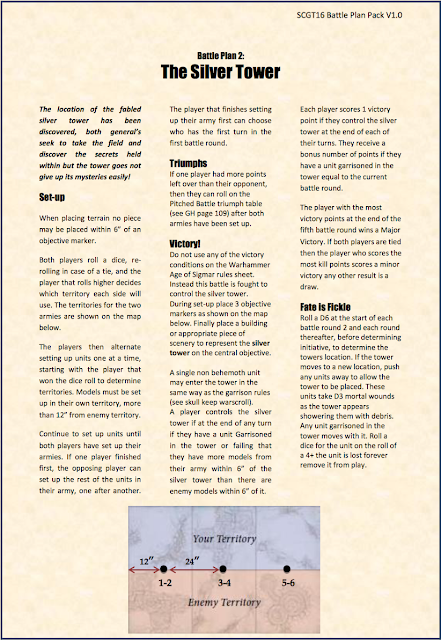 So in this battleplan it is all about timing, and keeping your units alive long enough to play their part. The idea is to control the Silver Tower which at the start of every battleround moves from one objective place marker to another. If you garrison the building you score extra victory points, but if your garrisoned unit is moved with the Silver Tower, there is a chance it could be slain! It could be a case of getting early points but risking your units dying early too, or waiting until later rounds to score more points. Problem being, if the enemy garrisons a building then the only way to get them out is to kill them which can be very difficult. 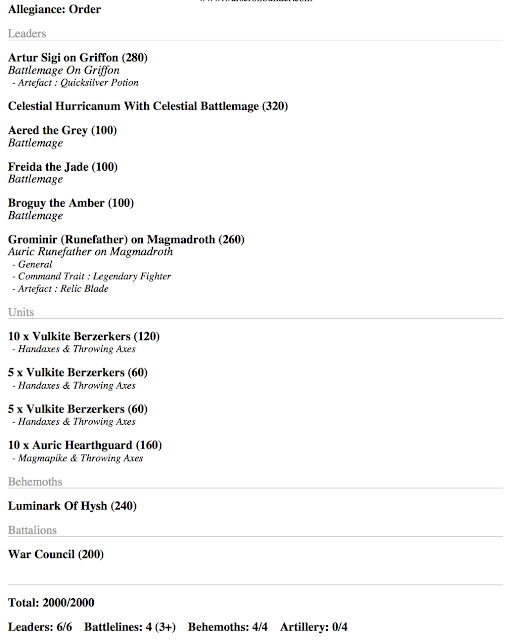 This is the list I shall be taking to SCGT so this is the list for myself once again. My plan was simple.. and suicidal at the same time... run all the units that could garrison the buildings up as fast as possible, use the Behemoths to harass and do the real damage to the enemy. 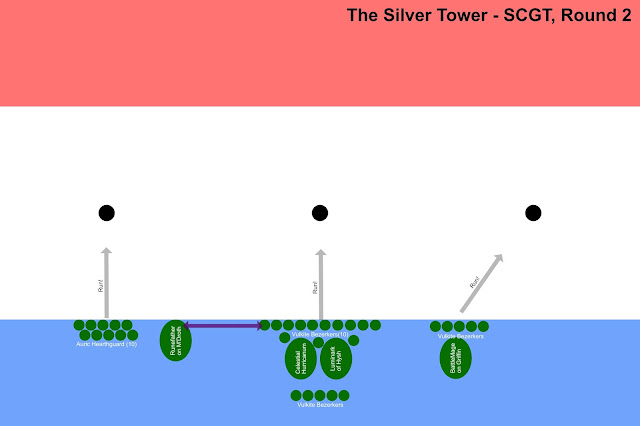 Set up for me. 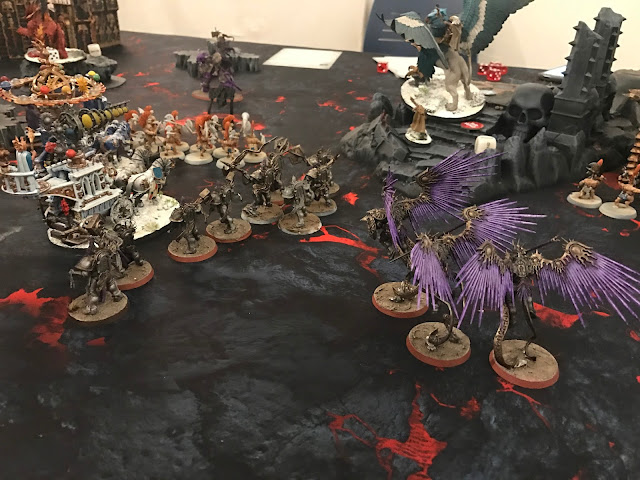 I decided to take first turn and got my buffs off, the fyreslayers all ran towards the three objectives and the War Council moved up towards the middle of the board. The Stormcast deployed fully in the Heavens and on the first turn brought down what he could (Ben did roll 6 1's in a row and a lot of units didn't come down), the main thing was that his Fulminators, 4 of them, and his Prosecutors in the Hammerstrike formation came down. He set his Fulminators on the back edge and his Prosecutors to the right of my flank. This meant his Paladins could come down within 6" of them and effectively be in combat with my Luminark and 10 man unit of Vulkite. The Fulminators failed their charge and the Paladins did not do half as much as the should of in the combat phase. 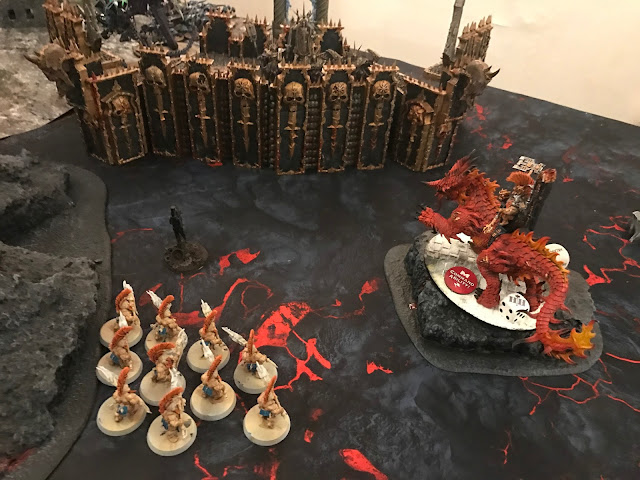 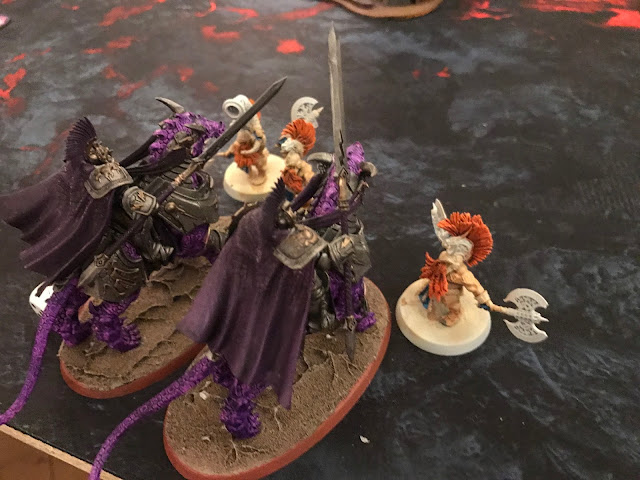 I scored a point for being close to the Silver Tower and then in turn 2 it moved off to my right flank. I gained initiative on turn 2 and with the War Council took out 2 Fulminators, the rear flank Vulkite charged them to hold them up. 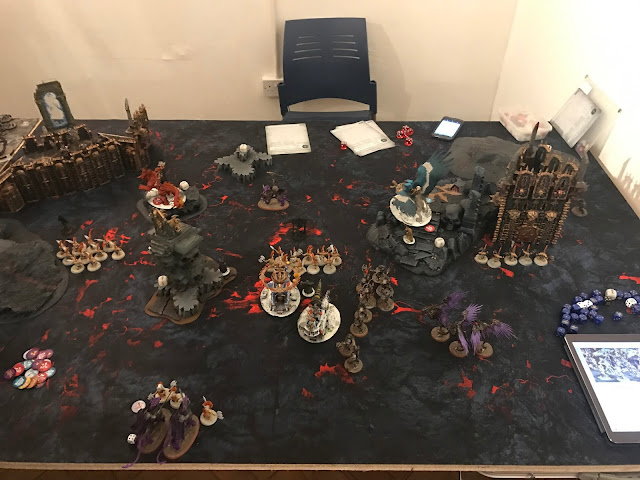 The Runefather could not get into combat with his own little council sitting atop the wall section in the top left. 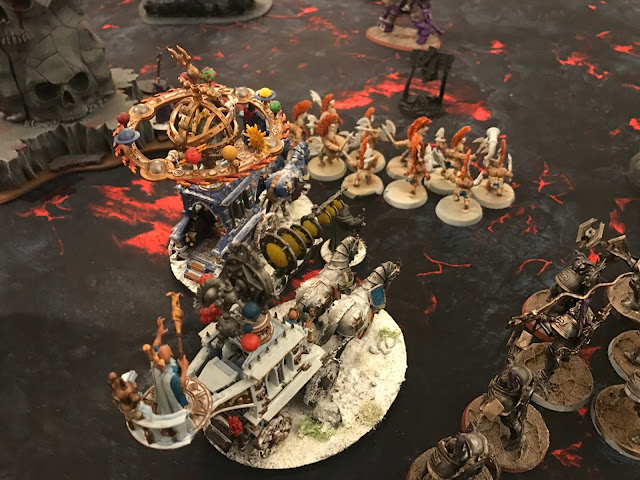 Luminark awaits the pain from the Paladins. 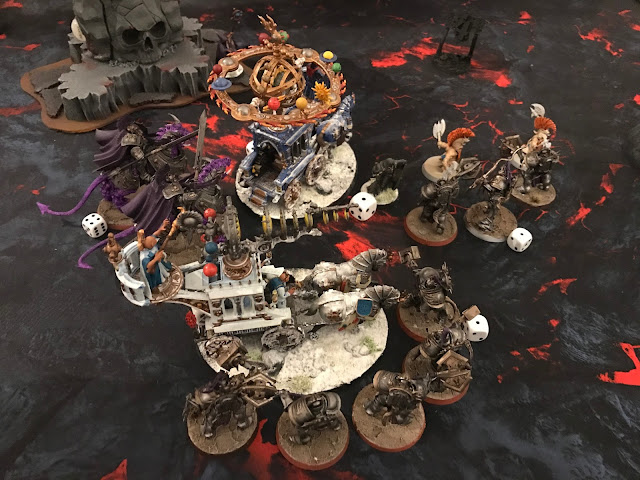 In Bens turn 2, dealt more damage to the Luminark and almost deleted off the Vulkite, the Gold Mage managed to stay alive though. He also got his big unit of Libertators down, his Lord Celestant on Dracoth too, which all set up on my left flank ready to charge the Hearthguard. But failed both charges. On the right flank, the 5 Liberators got into combat with the other unit of Vulkite, but I did managed to score another point. 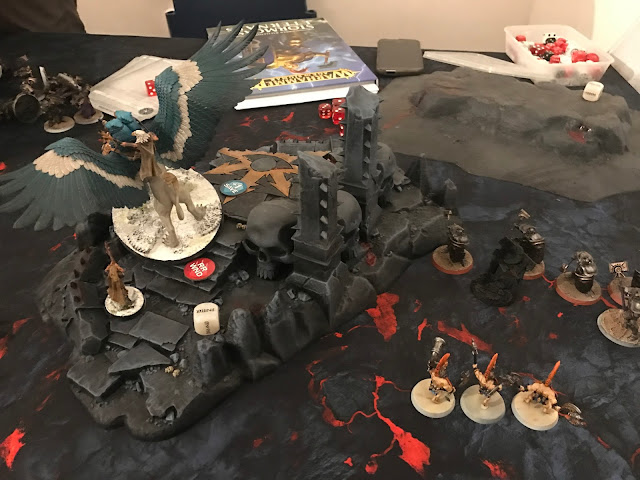 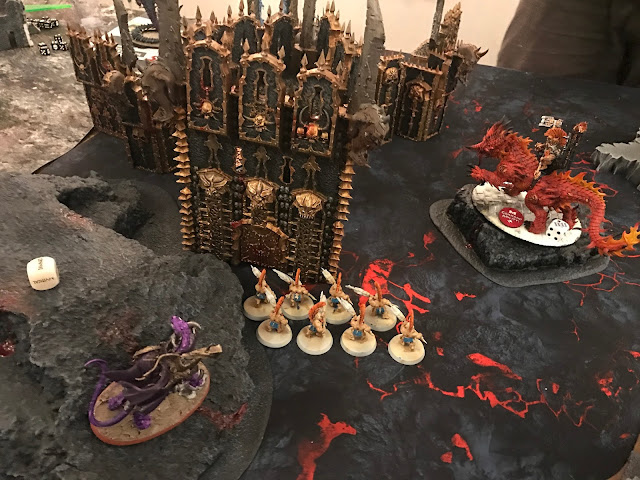 Ben got the double turn, the tower moved over to the left flank, just missing my Hearthguard, he got a few more charges off and also took out the Runefather who had done nothing all game. Somehow once again, he didn't roll well and failed some key charges, nothing else of note really happened, he killed a few Hearthguard and took the Luminark down to 2 wounds. 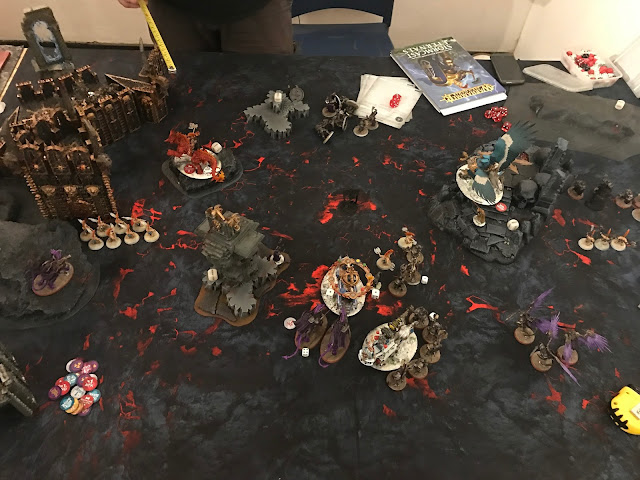 In my turn 3, I managed to get the Griffin into combat and take out the Prosecutors, the Hearthguard were destroyed by the Lord Celestant and the right flank Vulkite were also brought down to 3, the Luminark went down, and a lot of his units were brought down to a few wounds remaining.

Ben secured turn 4, the Tower stayed where it was and he brought his last unit of 5 Liberators down and straight into the Tower, he moved his Dracoth, the large 10 man unit of Libs and the rest of his Paladins across the board to deal with the last 2 BattleMages and the Griffin, The Hurricanum and another Mage went down, but importantly on the right flank, the Karl of the Vulkite unit stayed alive. Ben scored for the Silver Tower and the bonus points for having the Libs in the tower too.

In my turn 4, I charged the Griffin into the 10 Libs and the Lord Celestant and retreated the Karl on the right flank away from the Libs. I tried to kill the Celestant but every time I caused wounds to the Celestant he rolled a 1 for his save, which allowed him to re roll the save, he then saved them re rolls which in turn caused mortal wounds back! The Griffin was then Murderised... 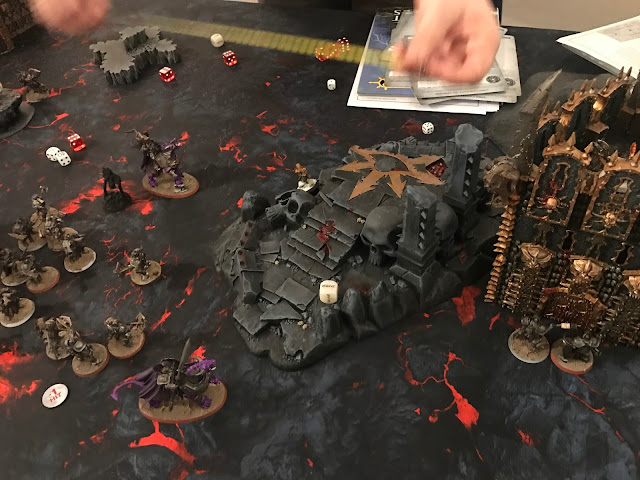 Turn 5 came around and the Silver Tower moved over to my right flank next to my Karl and the unit of Libs in the Tower was lost forever as it moved, this freed the tower up and the Karl jumped in. I threw an axe at the Libs and took one more down. I scored 6 points which took me into the lead once again. 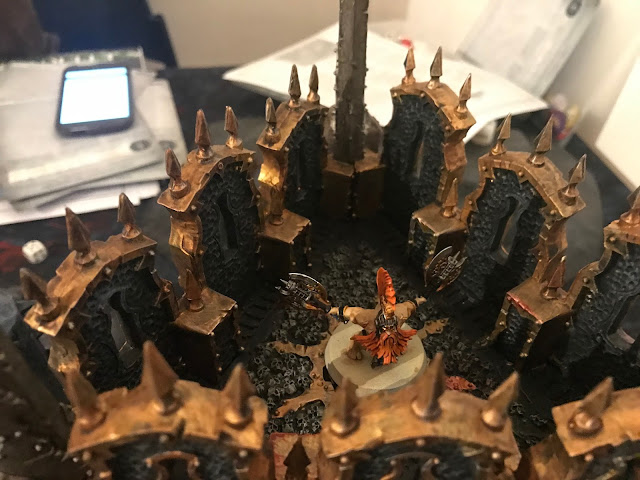 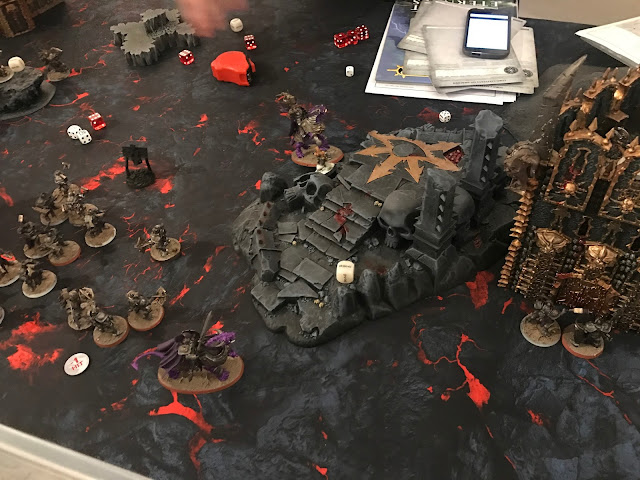 Ben was unable to do anything, he failed to kill the Karl and therefore could not garrison the Tower. So the Major victory went to me!

In the end it came down to the one little Karl who survived against all odds to take the win on the last turn. A lot of things went in my favour, the Tower moving across, fluffed rolls from Ben and a cheeky double turn at the end.

The battleplan is mad, it doesn't benefit armies with weak battle line (like me), it also needs numbers. The trick in my opinion is to get to all three objective points early, and wait for the Tower to arrive, jump in hope! It benefits armies with a lot of MSU. But like most AoS battle plans it requires a degree of luck. I didnt play the Runefather to his full potential and still haven't figured out best way to play the Hearthguard but I learnt a lot more this game and it was a fantastic swingy game. I only gained in total 80 kill points from killing his prosecutors.. and lost 1740 points to some brutal Stormcast attacks. All in all, another great game!