Good Morning! So last Tuesday I played the third battleplan from the SCGT game pack, Capture and Control, I played against Paul Flory and his Nurgle.

My story continues on, The Karl who defied all odds and captured the Silver Tower at the last saved his Council he had sworn to protect. For the gratitude of the Mages, he received an extra portion of Ur-Gold and is now in charge of leading a larger group of Vulkite. The battle was heavy on the War Council, but managing to secure the Silver Tower, it disappeared from Chamon and remerged on the edge of an abandoned town, soaked in shadow and mist, it could only mean they had travelled into Uglu, the Realm of Shadows. Artur turned to Grominir, the Runefather, neither said anything, but they knew and had heard of the rumours of this place. They found themselves in Mitzmanheim, long had it had its glory days and now lay in ruin.

"My Lord! Up ahead! We are not alone here..", Grominir looked up and saw the ground moving, a sea of plague bundled towards them. The Runefather ordered the Fyreslayers to surround and protect! In the centre of the town lay two relics, glowing with power, subconsciously they knew these needed to be protected. The Relics held the power to get back to Azyr.. 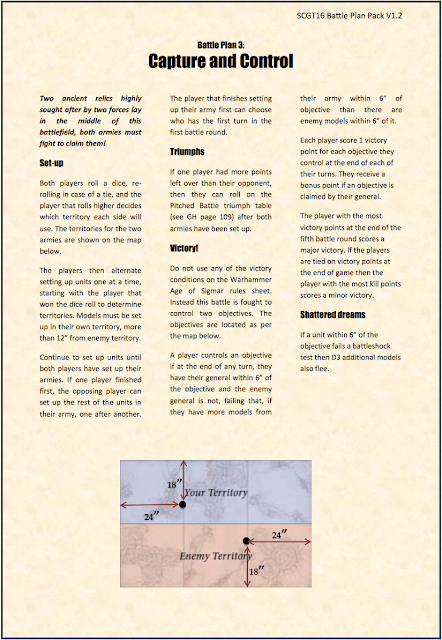 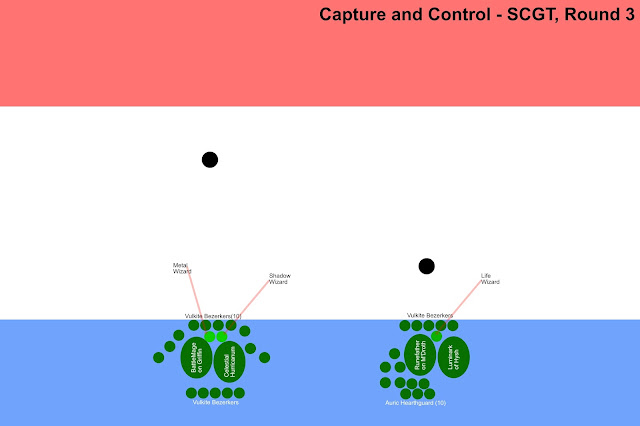 I decided to set up my General, Grominir on the right flank to secure my own objective and use the speed of the Griffin to kamikaze with the Vulkite into the enemy lines and try and kill the enemy General straight away. I had the Metal Mage and Shadow Mage in the left flank too to try and help hit the lines. The Luminark and Life Mage were next to the Runefather to help him survive as much as possible. 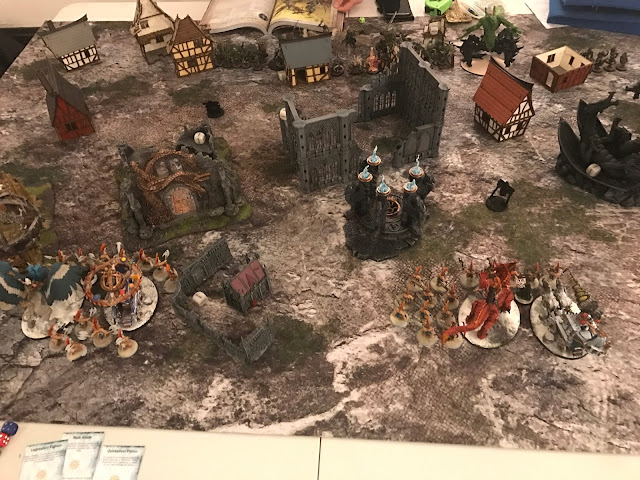 I was up against Paul with his Nurgle Daemons which looked daunting, the buildings in the town blocked a lot of sight and interupted both our lines. 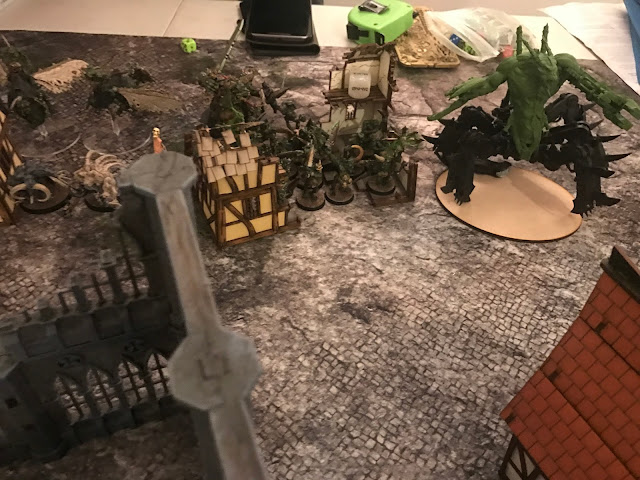 The Soul Grinder found it difficult to traverse the terrain features. There were big units of Plague Bearers and the army was led by a Great Unclean One. 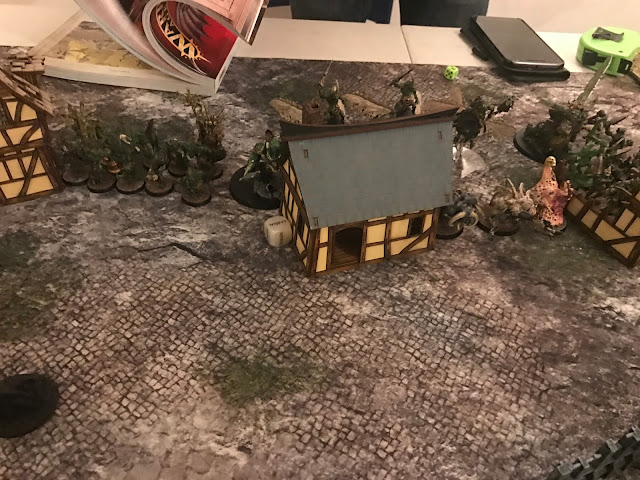 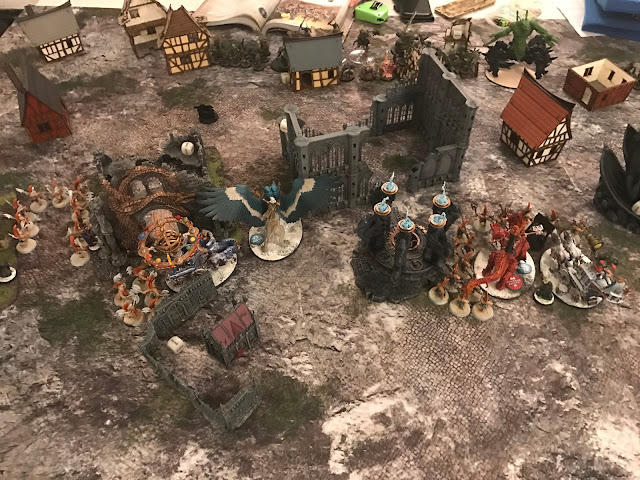 I was given turn 1 by Paul and pushed the lines forward. 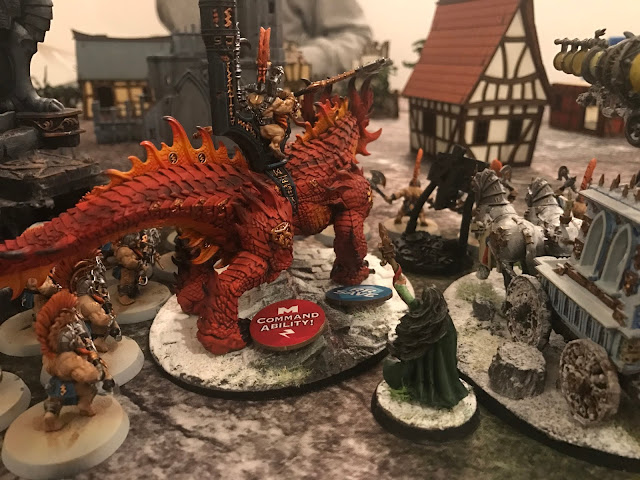 The right flank bunkered down on the objective closest to me, Grominir was defended highly and most importantly the MVP, the Karl of the unit of Vulkite was in front of him. 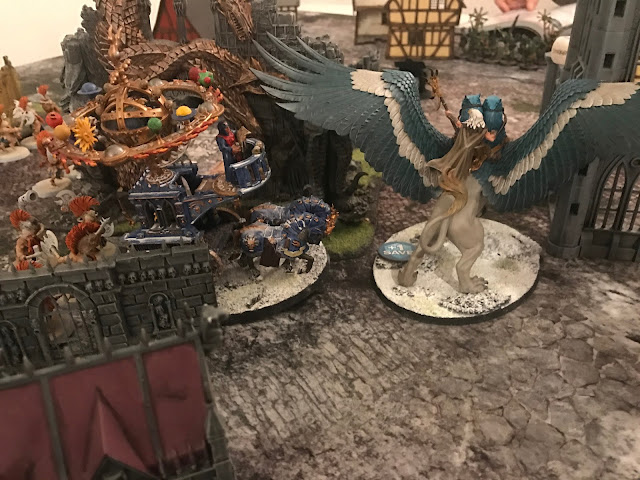 The left flank moved up quickly, but the buildings hampered them from getting to much distance. I got a few buffs off including lots of protective auras onto the Runefather. 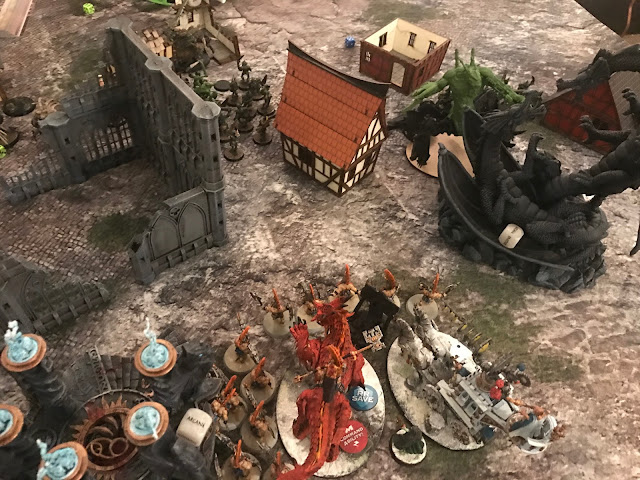 On Pauls turn 1, he moved the Plague bearers up as well as the Soul Grinder, running them all hoping for the double turn. 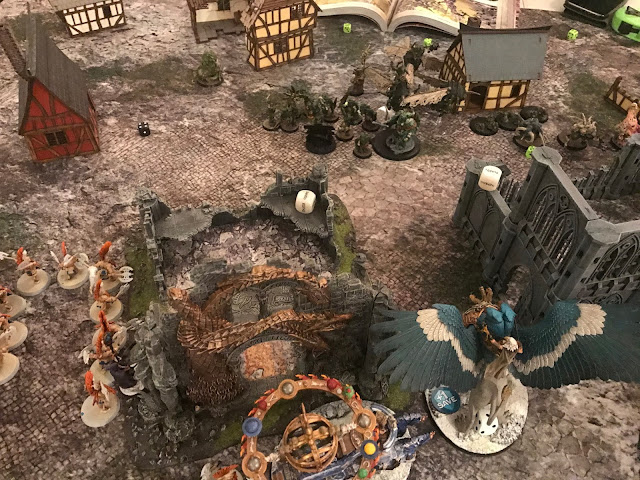 More plague descended on the other flank including a Daemon Prince, Herald, Nurglings, Beast of Nurgle and Plague Drones. 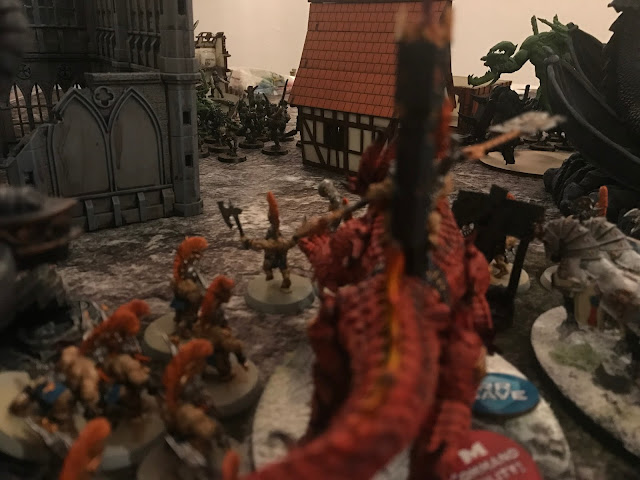 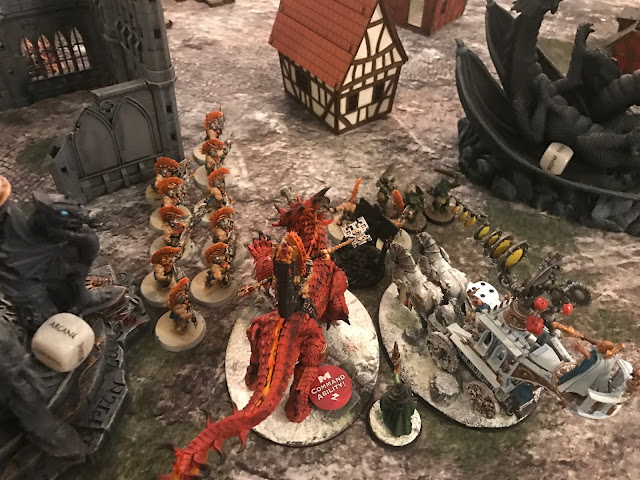 Paul managed to get the double turn and made the charge with 30 Plague Bearers into my lines. These should have destroyed everything but instead didnt even manage to kill the 5 Vulkite in front of the Runefather (probably because the legendary Karl was in this unit and bossed it). He also left the unit exposed and within 3" of the Runefather who with his Legendary Fighter, Relic Blade and 3" range hit back and killed 12 Plague Bearers. By the ned of my turn 2, with my magic, shooting and more attacks, I had killed the Bearers down to 2 models. Not in the picture, but the Soul Grinder had been sneaking round the right flank and was preparing to charge the Luminark. 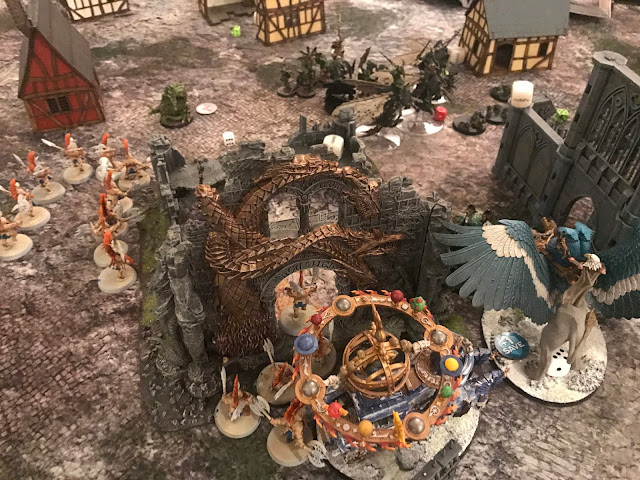 On the other flank, he charged his Daemon Prince in and due to me not really knowing what one does, I wasted my Quicksilver potion on it and still fluffed all my attacks. the Vulkite charged the Beast of nurgle on their turn 2 and killed it before it could do any damage. 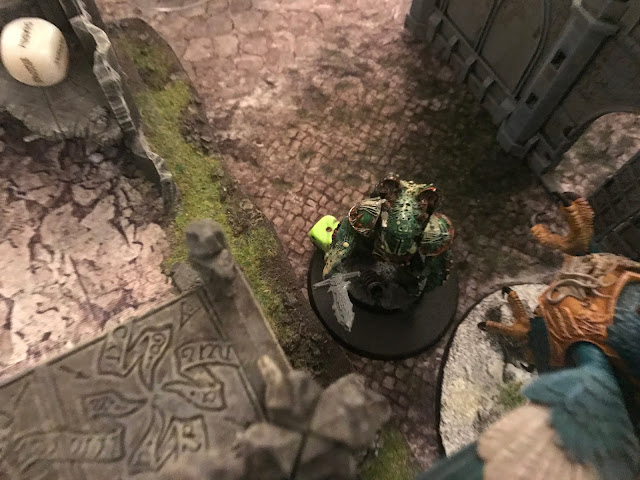 This time I got the double turn but still couldn't kill the Daemon Prince leaving me tied once again with the Griffon. 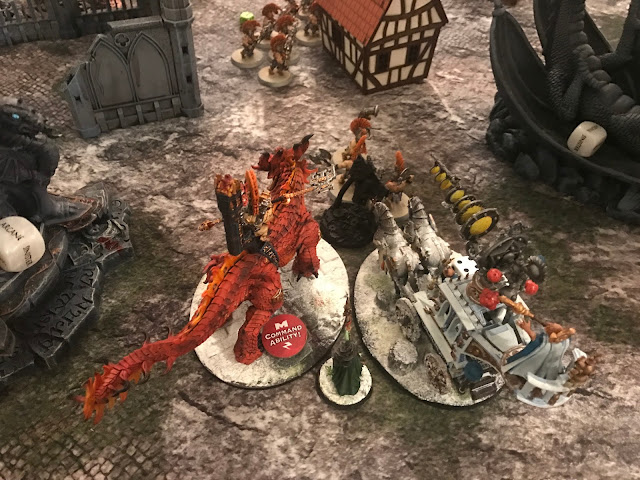 The Auric Hearthguard sacrificed themselves and charged the Great Unclean One to defy him getting closer to my General. 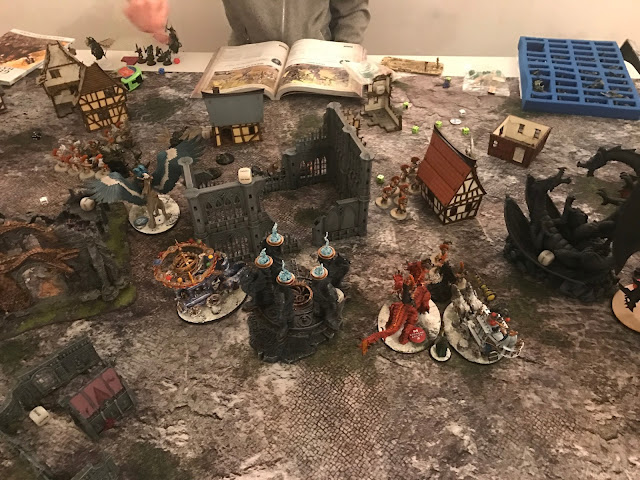 I finally managed to free the Griffon (after a lot of axes to its face) and charged him up into the Plague Drones which had a -1 to Hit cast on them by the Shadow Wizard. 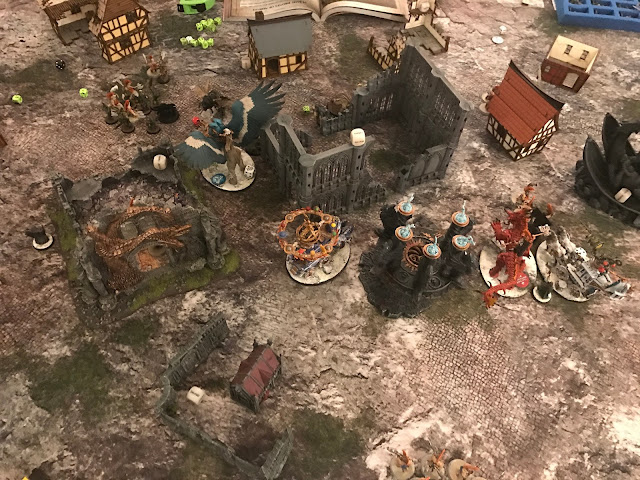 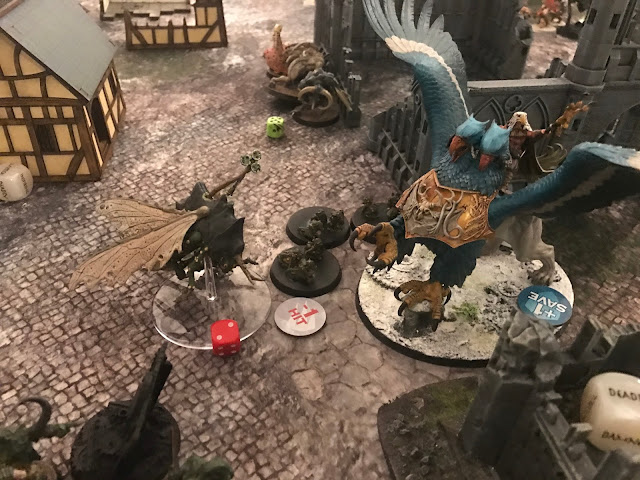 I took them down and also carved through the rest of the left lank with the Vulkite. 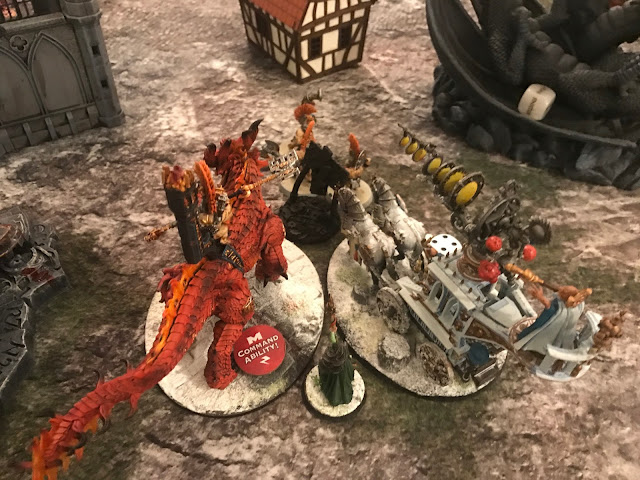 The Great Unclean One took all 10 Hearthguard out.

Ok, no more pictures as it got pretty intense here, Paul took turn 5 and he got the Great Unclean One into the Runefather, I was pretty high up on points here, it was 6-3 and all I had to do was keep the Runefather alive, but I could not.. The Great Unclean One and shooting from the Soul Grinder meant he went down pretty easy, (the Luminark and Life Wizard also fell to the Soul Grinder) but he did take some damage in return, he controlled both objectives and therefore went level on points 6-6. Finally it came to my turn 5, all I had left the Hurricanum and the Karl is talk about earlier in combat with the GUO. I cast the comet down on the GUO but instead it fell on some Nurglings. I instead raised the Storm of Shemtek and threw the dice. 2 6's and a 4! I caused 12 damage with it and he failed enough of invulnerable saves and it went down. This left just the Karl on the objective and I ended it there meaning I went 7-6 up!

Once again the Karl saved the day and won the scenario for me! Tonight I play Kye Baker with his Skaven in the fourth game, Domination. I can't see me fairing as well in this one. Kye is a very good player and knows his Skaven inside out. Will be great fun though!

Conclusion:
This Battleplan is pretty great, we went into the game thinking it may be like Take and Hold with only 2 objectives, but it definitely is not. You need to manage your own General, whilst sending Kamikaze units out to either hold his up or kill it. Paul tried to get his General over to me, but Nurgle is pretty slow and I think he got to my General one turn too late. Looking forward to playing this one again in the future.