This week I played Kye. We worked out since Generals Handbook has dropped and the club has expanded, we haven't actually played a competitive game of AoS. When we play, we always play a narrative or open battle using GW Campaign book battle plans.... This week was no different! :) We had a great tactical game but the stories soon started to flow.

'As the last of the plague was rid from Mitzmanheim in Uglu, the relics were secured and harnessed by the Mages. The residents of this ruin begun to emerge from the buildings to look upon the brave warriors who had saved their homelands from the disease Nurgle had been spreading for the past century. The Mages stayed for a while, using the time to heal their wounds and also attend to the Runefather Griminir who had been badly injured by the battle. More Fyreslayers heeded the call of the Horns of Grimnir and before long the army was back up to full capacity.

They headed west towards the Gate of Huninfir, a passage into the Realm of Ghur and their next task. Sigmar had sent word to them to tackle a rising clan of Skaven in Carcassonne, this was not the end mission for the Council but a call direct from Sigmar could not be ignored, the War Council would fulfil their duty to the God King.' 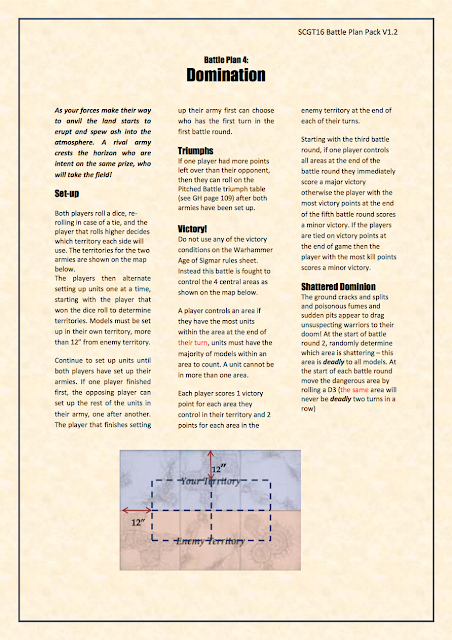 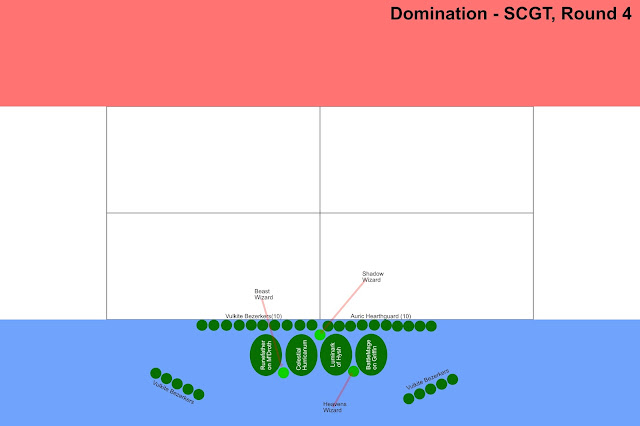 I set up bunched quite tightly in the middle, a Deadly Forest was right in front of me, I took the first turn to at least get a few points on the board straight away. 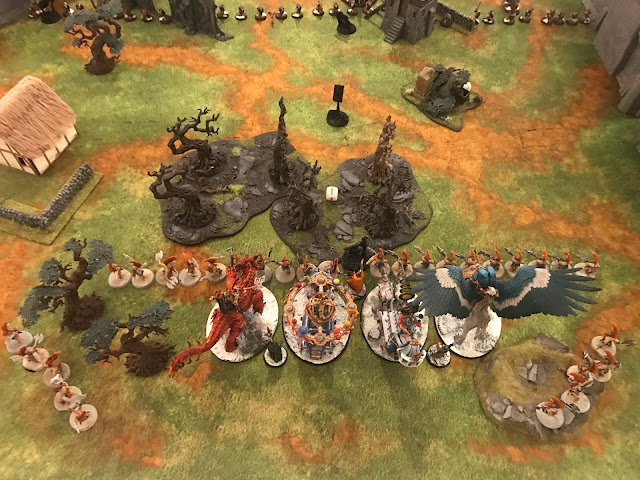 I was aware Kye had some Stormfiends so set 2 of my units up to block tunnelling. 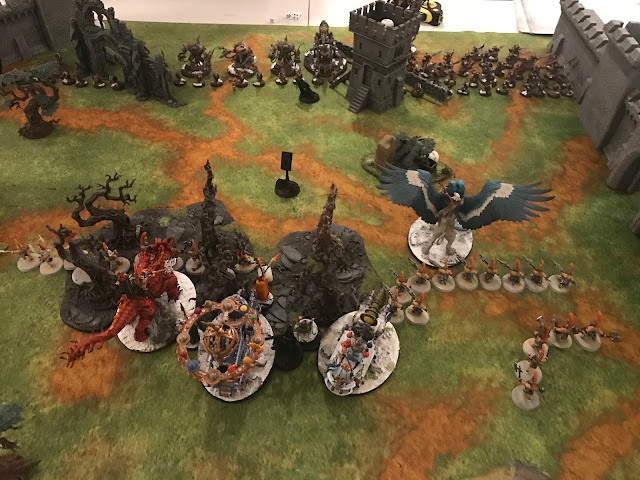 I moved everything forward in to the deadly forest, the Griffin flew up the right flank with a Mystic Shield and LifeSurge on him to goad his fiends and Stormvermin down this flank. I scored 2 points for units in my territory. 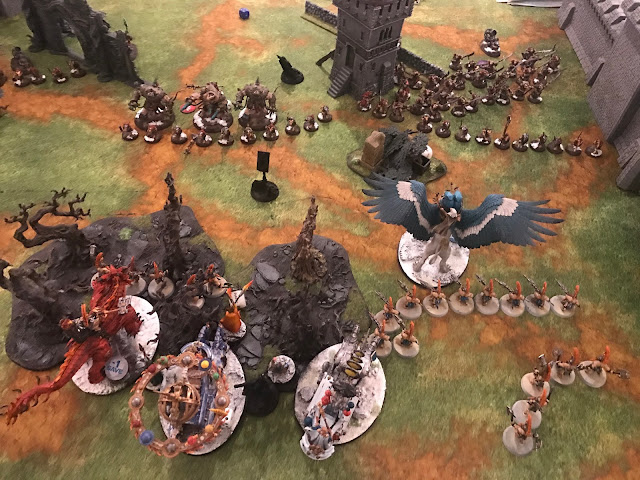 Kye moved his units forward, running the Clan Rats, he cast Death Frenzy on the Stormvermin and also Gnash and Naw which gives them plus 2 to hit from the buffs. He shot a few wounds off my Luminark and Griffin but did nothing significant damage wise. 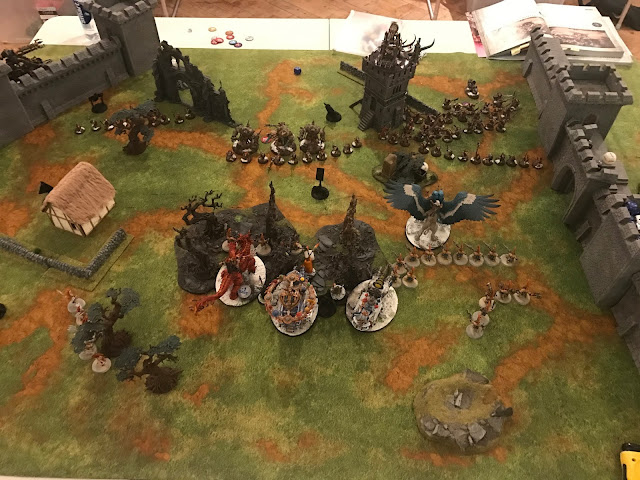 Kye also got a double turn on me, he charged the Stormfiends and StormVermin into my Griffin, the Clanrats ran forward some more and charged my Vulkite Berzerkers in the Deadly forest losing 2 models in the process. I used my Quicksilver Potion but fluffed all my attacks with the Griffin and he died a gruesome death. Literally swamped and ripped apart! The Hearthguard were also beaten to a pulp by the tail end of the StormVermin.. these guys when buffed in the way Kye does end up having 3 Attacks each, Hitting on 2+ re-rolling 1's, wounding on 3+, re-rolling 1's and a -1 Rend with 2" reach. Also having Inspiring Presence and 30 of them mean they are the biggest threat in his army! By far.

In my turn 2, I had a great Hero phase with the council and combined with the shooting phase took out most of his Vermin, took wounds off the Warbringer and took down a Warp Lightening Cannon.
I moved the Runefather and some Vulkite up the left flank to deal with 10 Clanrats and a few weapon teams. With the StormVermin down to a manageable size, I was much happier. But he had positioned his Fiends in such a way that my Hurricanum was stuck in the forest. 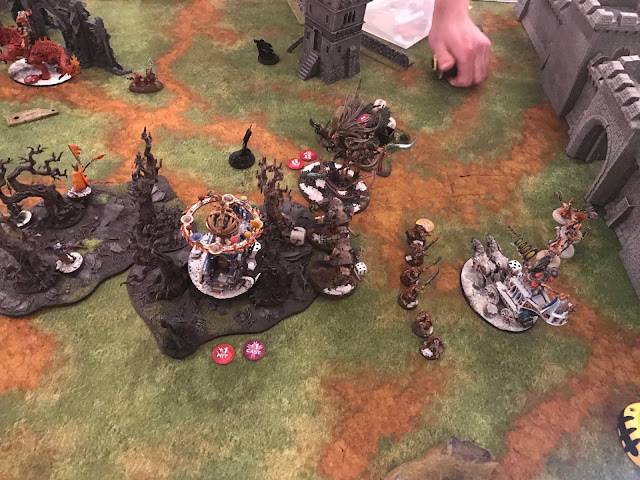 Kye got the third turn priority and moved his Stormfiends round to charge the side of the Hurricanum, the remaining Stormvermin set up to charge the Luminark, now severely wounded. The clanrats on the right flank were killed by the Vulkite and the right flank didnt fair well against the Runefather. He did kill another unit of Vulkite with the other Warp Lightening Cannon on the far left flank (out of all pictures) 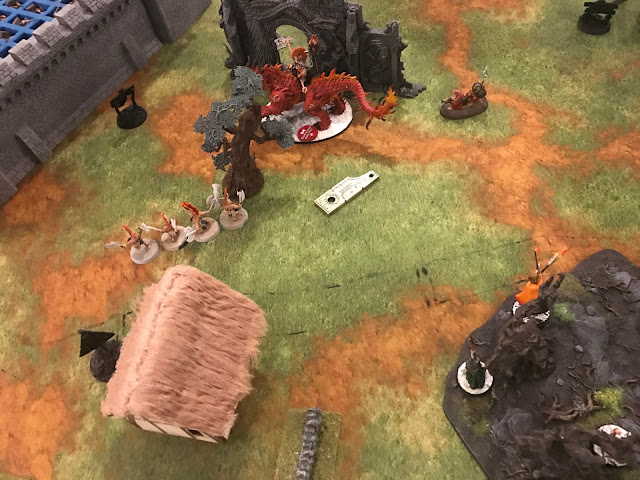 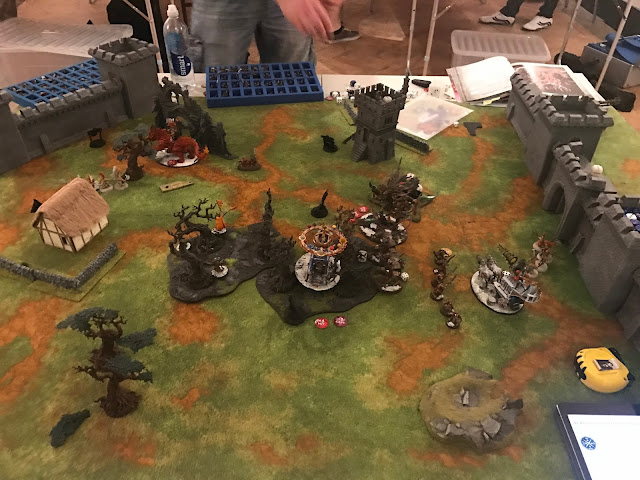 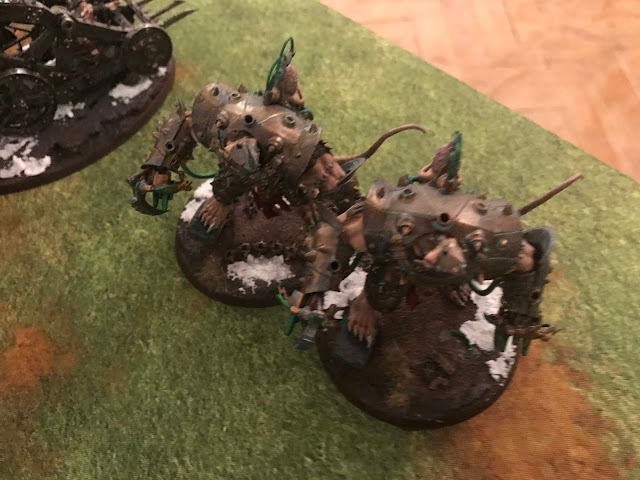 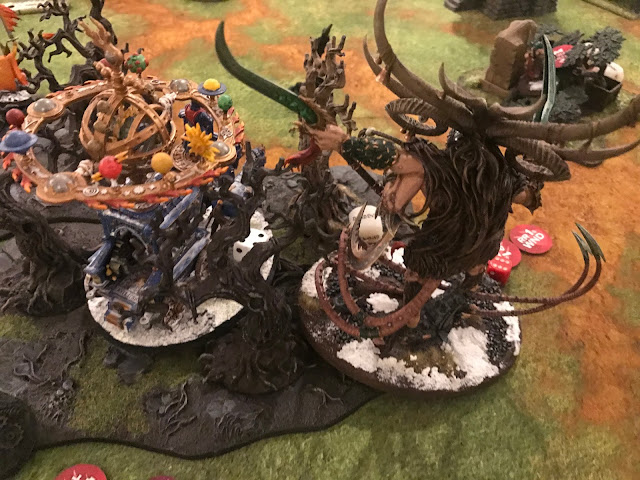 He attempted to charge the Fiends into the deadly woods to and succeeded in the charge, but then proceeded to roll a Double 1 on his deadly tests! Killing both StormFriends!! After 10 minutes of us both laughing our asses off, he charged the Warbringer in instead and deleted the Hurricanum. The Luminark went down to the remaining 5 Vermin, still hitting hard as nails. 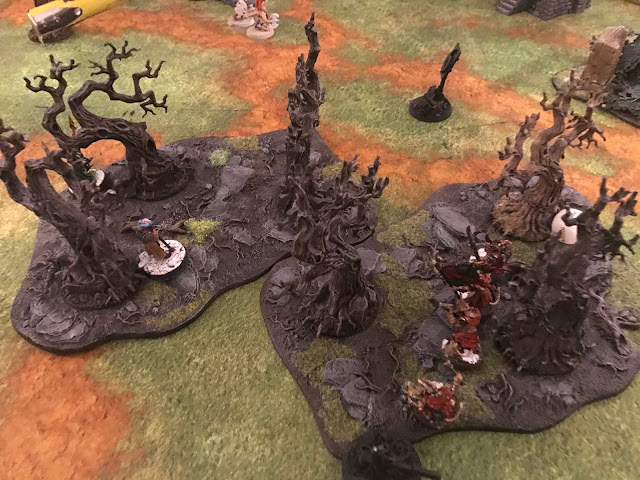 The last few turns were both of us just running round the board capturing deployment zones, I had left 2 Vulkite Berzerkers and 2 Wizards, Kye had 3 StormVermin, A Warlord and a Cannon. It was a brutal game but brilliant.

Kye won 15 to 12 on points in the end and also took the Legendary Karl down with his Warlord at the last, denying him the opportunity to add to his tattoo markings! The battleplan is brutal as you are playing in a small area for gaining points. Kye played it right by coming at me in waves and keeping his Cannons outside of the areas, this means he could keep shooting me without fear of being charged as I would have had to take one of my units outside of the territory to do this. Kye has honed this list over the course of 2 years of Sigmar and it is a proper beat stick. You won't find the list anywhere else but is probably the toughest and most brutal pure Skaven list out there. 30 Stormvermin being the key. I won't give it away too much, ill let Kye do that, but using a Warbringer, Warlord, Packmaster, plus having the Command Trait to allow 2 Generals to use Command Abilities is amazing. Well played Kye. Well played!