'With the sound of Skaven screams still ringing in their ears, they fell back and headed towards the Gnawing Sea and the Maw gate which should have led them to Azyr. Instead as they emerged from the portal, the heat hit them like a brick, in front of them was a war torn ruined city, gradually being reclaimed by the surrounding deserts, they knew they were in Shyish, but did not know where. The Realmgate they emerged from was one of 4, positioned in a diamond, as the last of the War Council came through, the gate plasma turned from a Blue hue to a Green one to match the other 4.

Across the battlefield and emerging from the far Realmgate stood a Feast of Ogors, huge beasts of the Gutbusters, armed with huge cannons and weapons. The objective here was clear, claim the Realmgates and begin the process of altering their pathways. The Acolyte manning the Luminark had a plan.. it was a suicidal one, but one that may just work. He received blessings from Bretorri the Life Wizard and the Shadow Wizard too, with the Mystic Auras surrounding the machine, he flew back into the Realmgate and emerged instantaneously across the battlefield in front of the approaching Ironguts and General Tyrant. The Acolyte charged the weapon and fired direct into the Boss, he was thrown back off the sand dune and before he could recover to his feet, the Luminark charged forward into him, the Acoylte took a swing and connected again knocking him down, a horse rose up and slammed down hard onto the Tyrants head, splitting his skull and ending his rein.

Shocked at the sudden demise of their leader, the Ogors rushed the Luminark, the Acolyte with his last breath uttered 'For Sigmar!'.'

This week I played Mark and his Gutbusters, Mark has a great win ratio in the club and not many have beaten this Ogor list, it was great game and came right down to the wire. I picked an agenda in secret which happened to be, Kill the General. In this scenario, it was very much like Border Wars from the Generals Handbook, but with the twist of the objectives being Realmgates which you could Hop between. You scored 1 point for controlling your own Realmgate, 2 for each on the Borders and 4 for your opponents. 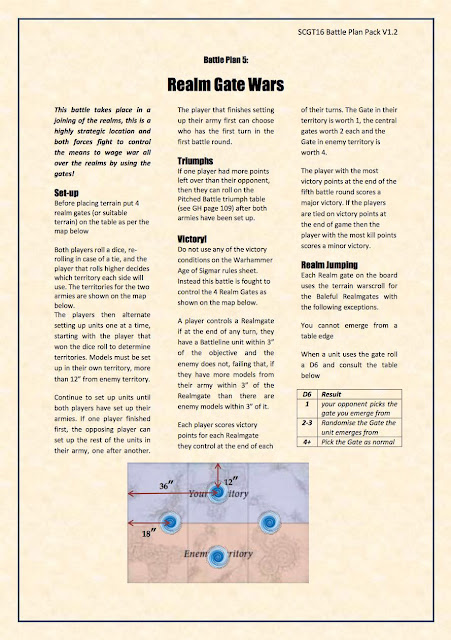 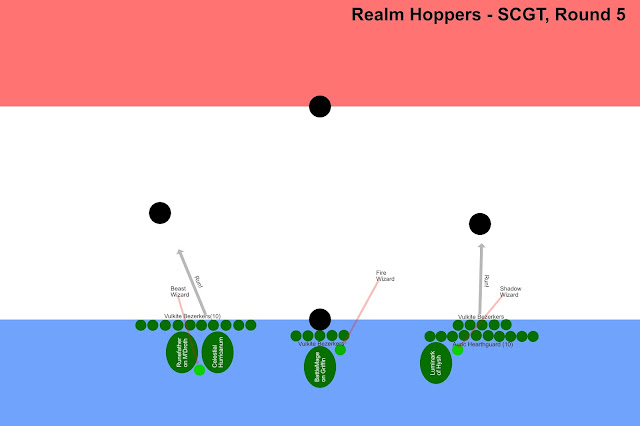 I set up to take first turn as I always do and to make a dash for the Border objectives. The Luminark was actually positioned in the middle and Griffin on the right. Instead of a Beast Wizard, I went with a Life Wizard to aid the survivability of the Big Things. 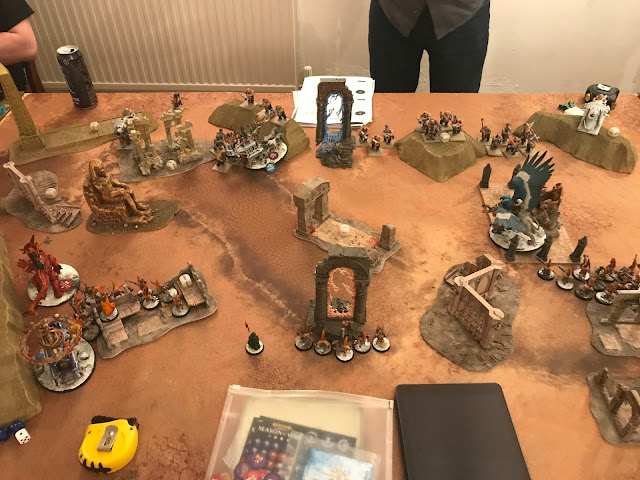 I took first turn and gave the Luminark LifeSurge and Mystic Shield, I then sent it through the Realmgate and got him to come out in my opponents one. I moved everything else up to claim the middle two objectives. I shot my Luminark into his General, the Tyrant and finished him off in the combat phase with some horse kicks. It was then swamped but not destroyed. 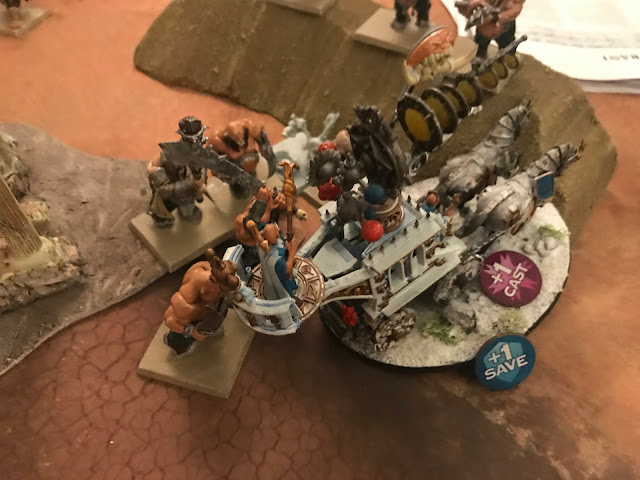 This meant Mark could not move unless he retreated and held him up for a turn. 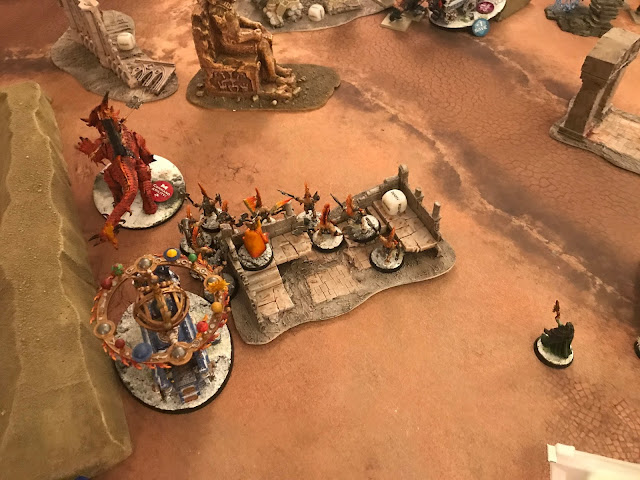 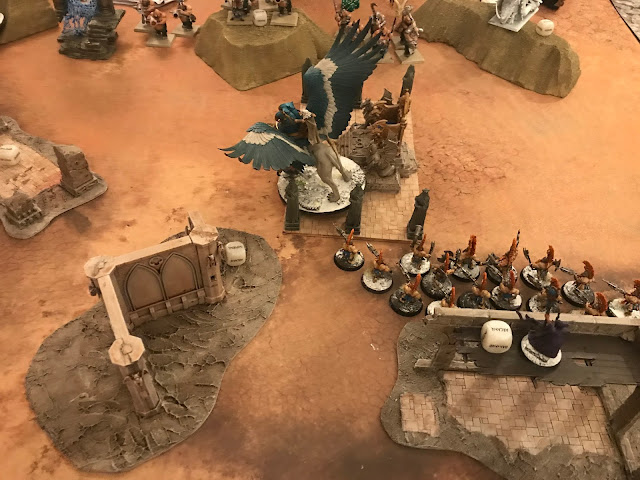 I moved the Griffin up to entice him to charge this flank. 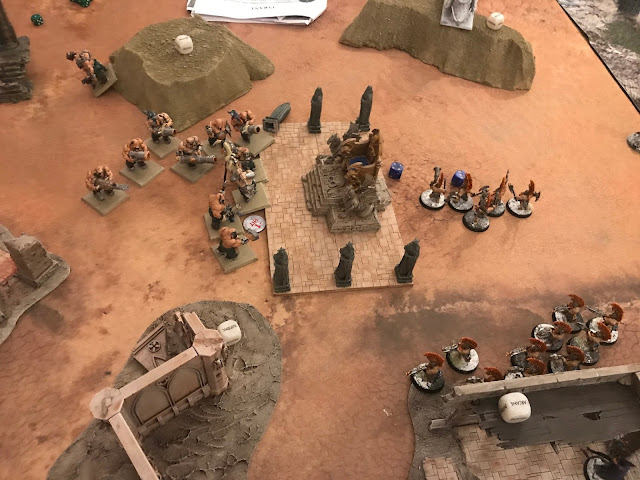 The Ironguts and Leadbelchers moved up and charged it, killing it in one but in turn left him exposed on this flank. 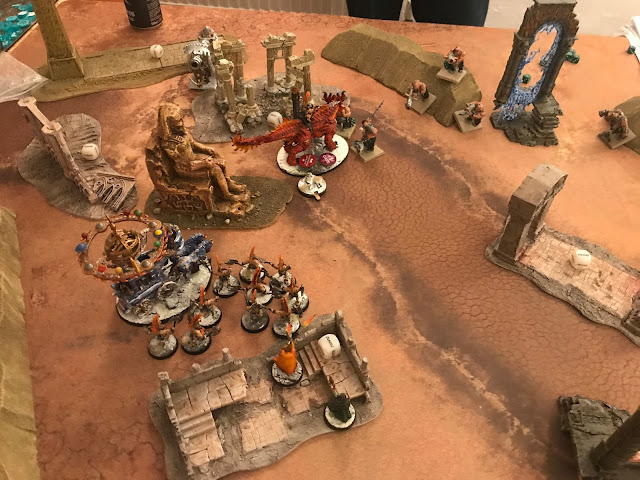 The Runefather charged up on the second turn into the Ironguts and killed them off, on the other side, the Hearthguard shot at the other unit of Ironguts whilst the slayers attempted to control the Realmgate here. 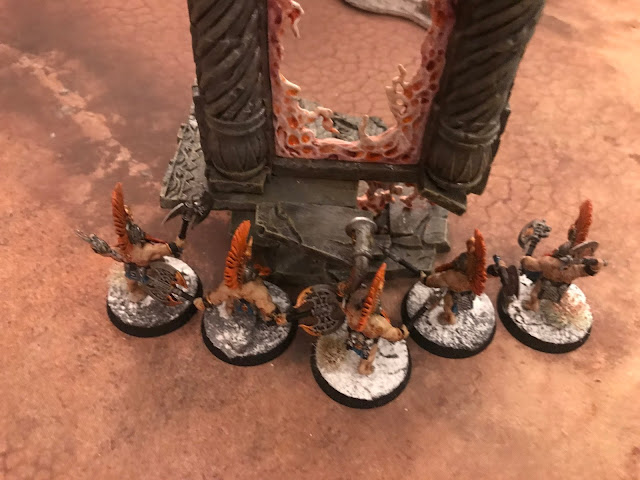 In Marks turn 2, he shot my Runefather done to just 2 wounds left and also had his Ironguts on my right destroy the Vulkite and Hearthguard. The butcher tried and failed again with the Maw spell and moved towards the Hurricanum. 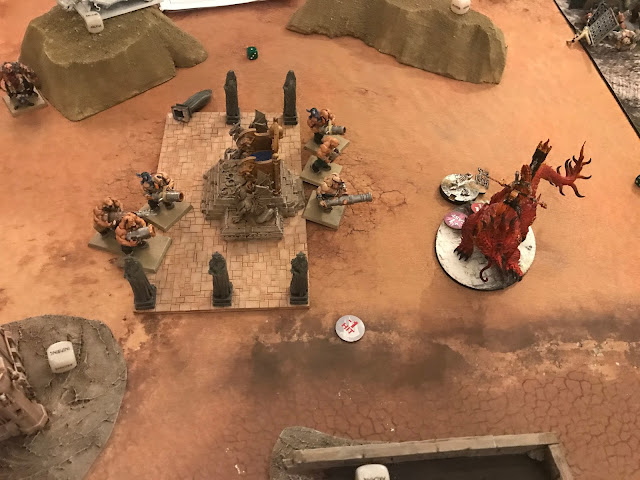 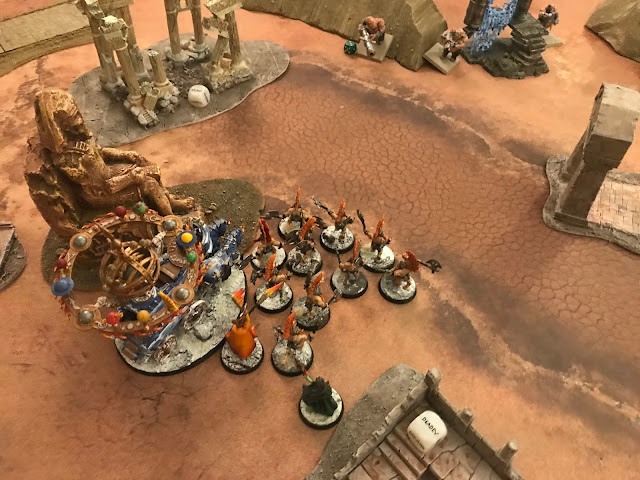 The Vulkite with 'The Karl' leading began running towards Marks back objective. The Hurricanum took down a blaster 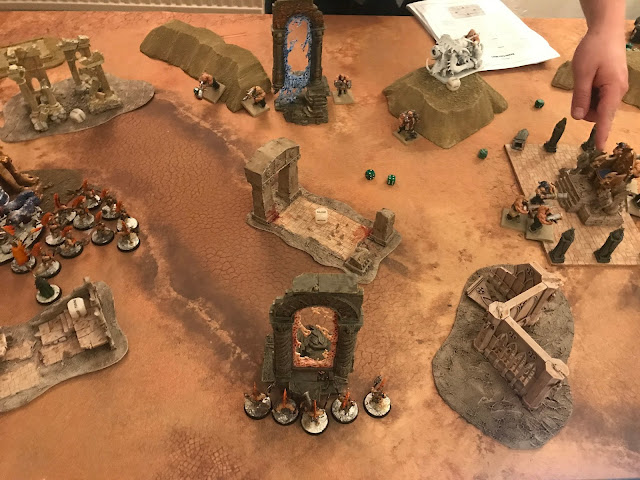 In Marks turn 3, he killed my Runefather and moved his other unit of Leadbelchers across to kill the Vulkite holding my gate. His other blaster moved across to try and deal with the Hurricanum as well. 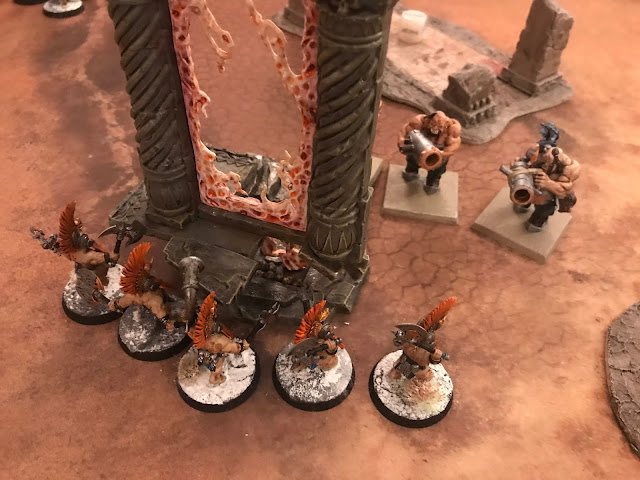 Importantly he failed the charge with the Leadbelchers into the Vulkite. 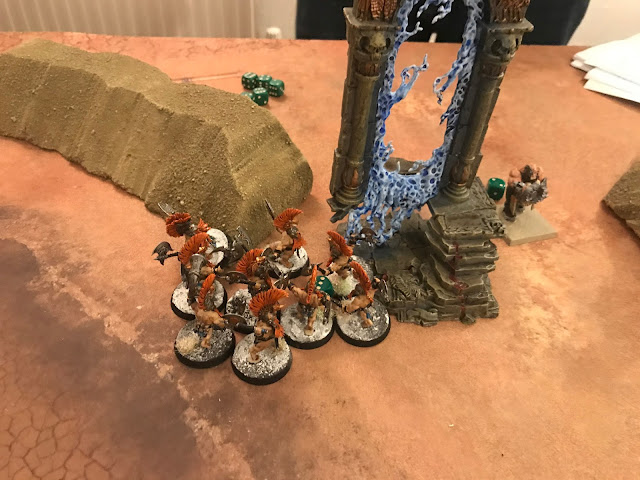 I got initiative turn 4 and moved to his gate, buffed by the Hurricanum I killed his Butcher and a unit of Leadblechers. 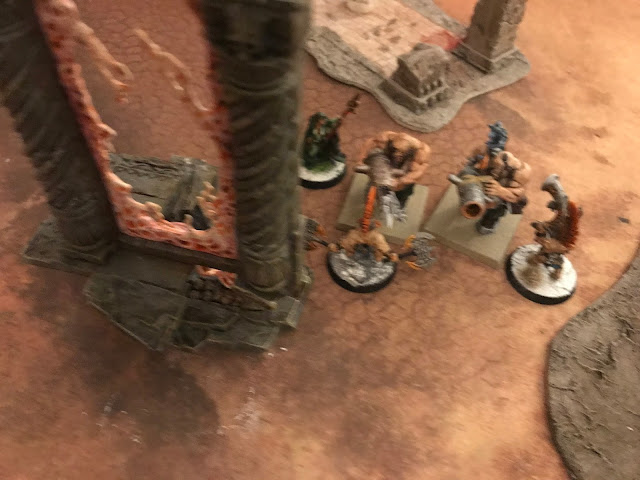 I also charged the other unit and didn't fair so well. My Life Mage also came across but again didn't deal any pain. 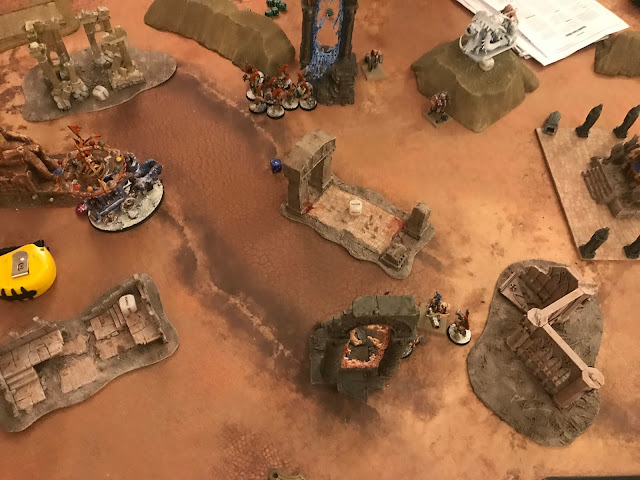 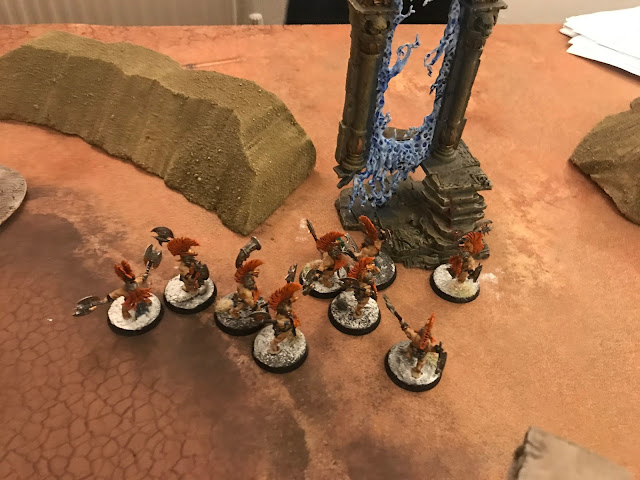 Mark got the double turn and killed a few Vulkite but got murdered in return. His leadbelchers came across to shoot the Hurricanum and Blaster moved across as well. 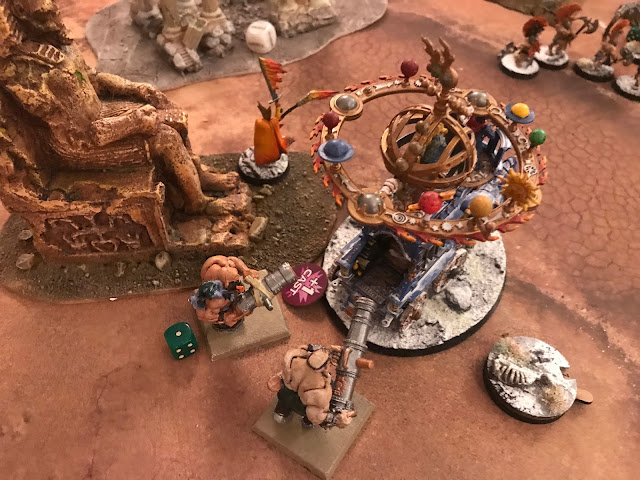 He failed to kill the Hurricanum but did kill the Vulkite on my gate. 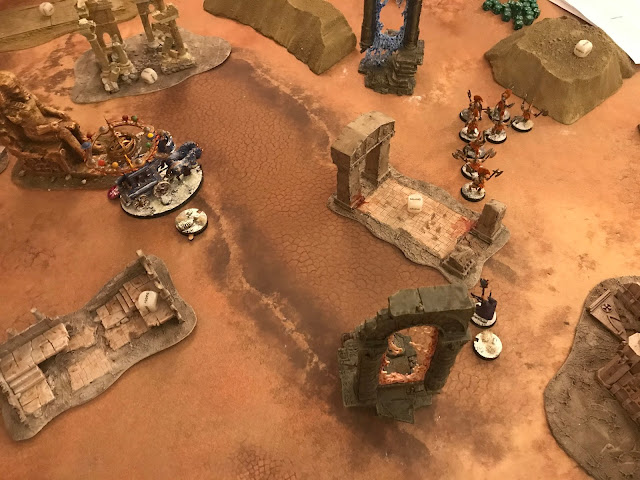 This is the last picture and end of my turn 5, I was one wound on one leadbelcher away from tabling him and the score was 19-19, I won on kill points giving me a Minor, but because I achieved my agenda 'Kill the General', this gave me a Major.

This is a great battleplan, adapted from Border Wars but with the added flavour of Realm Hopping. My initial balls deep tactic of the Luminark through the Realmgate could have gone badly wrong, but everything went right and with his Tyrant out the way, it meant I needed not worry about his brutal abilities. It also held him up and allowed me to dictate which Realmgates to fightt over.

All in all, Fortune favours the bold in this battleplan, but protect your back edge and flanks!