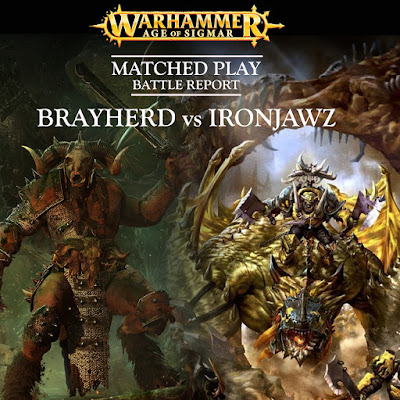 So tonight I managed to finally play my first game with the Brayherd, I have 1000points painted and challenged Matt Ransley to a 1k Matched Play game. This is the army I shall be playing for the foreseeable future, Beastmen were my first love in Warhammer and after selling my original army back when AoS dropped (personal life financial stuff), I have wanted to redo them in Age of Sigmar. Matt has been playing a year or so no, although hasn't played many games, his Ironjaw army is amazing and received a painting nomination at Realm Hoppers at the beginning of the year. 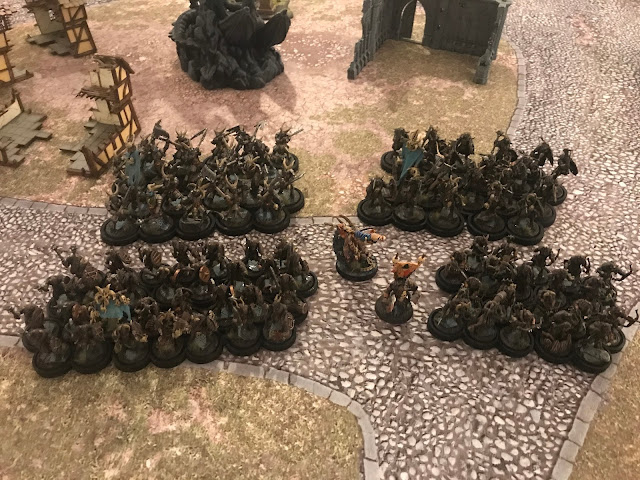 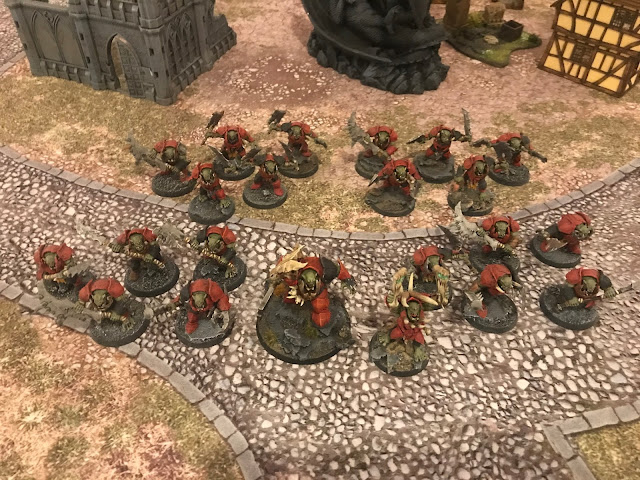 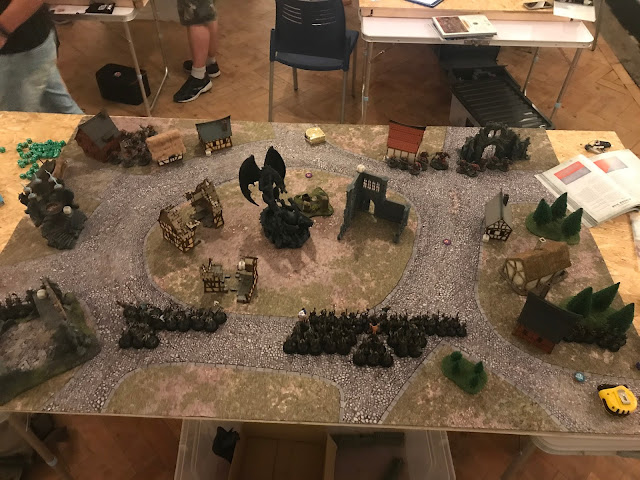 We rolled up for Border Wars in the Generals Handbook. I had set the Brayherd on the line, knowing that Matt would make me go first, I had my objective protected and had units ready to run out for the middle ones too. Matt had split his forces on each flank with his General in his Brutes plus his Warchanter on the left and his Megaboss and other brutes on the right.

Turn 1:
My Turn 1: I ran my whole army up to the middle of the board claiming the middle objectives and potentially being able to get a first turn charge off from the Bestigor on the left flank. The beauty of the Brayherd is in their movement. They can move 6" + run (+1" from banner) + 3" to move as within 8" of GBS and the Brayhorns allow them to charge too. I did make one mistake here but moving off my own objective meaning i only scored 4 points this round. The Bestigor failed their charge and the Raiders took 1 Wound off the Megaboss on the right. 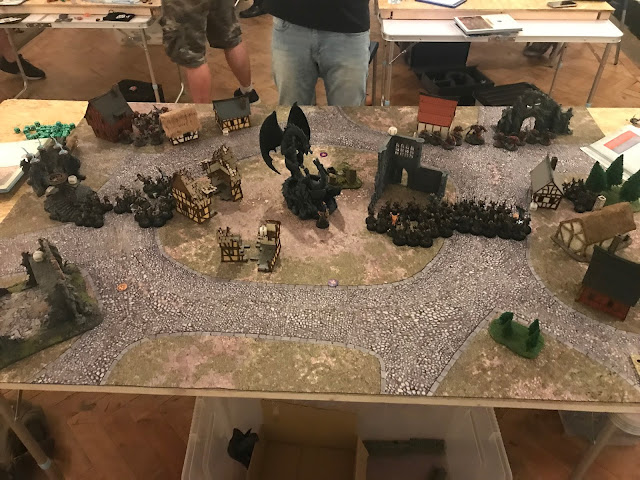 Matts Turn 1: After his initial Hero phase movement and buffing, mainly +1 to hits, his Brutes on the left smashed into the Bestigor, clipping the Raiders too and the Megaboss wanting to avoid the big block of Ungor and Gor, charged into the raiders on the right. The final unit of Brutes moved across to claim his middle objective. Brutes are well... brutal, they killed 7 of my Bestigor and took no casualties in return. The Raiders took a wound on the right off the Megaboss but were then hacked down fully. I had inspiring presence on the Bestigor so no more ran from their. 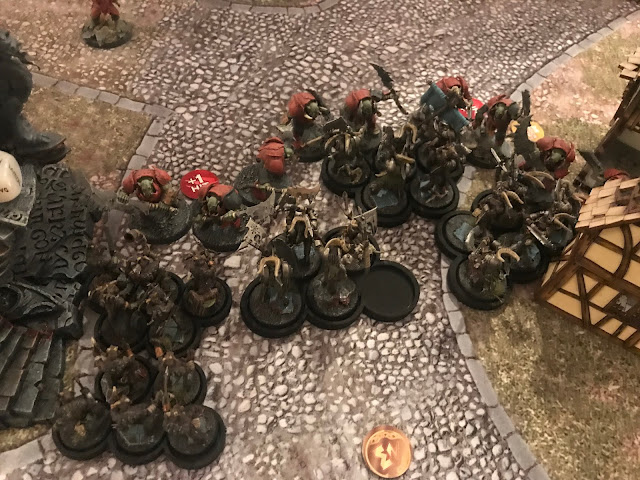 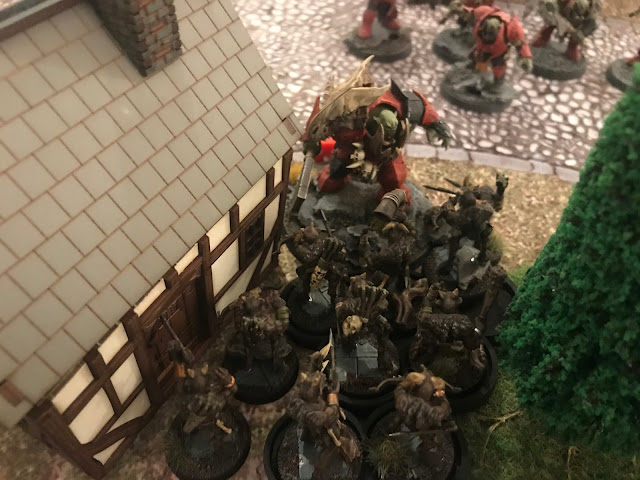 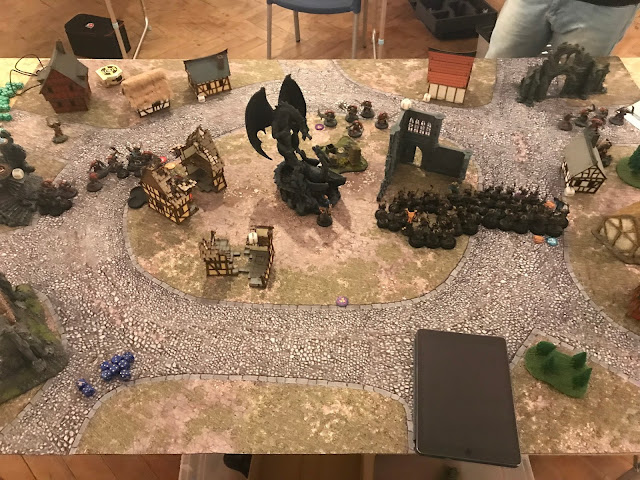 Turn 2:
My Turn 2: I won Priority and again gave inspiring presence, this time out to the Ungor and Gor, also casting Mystic Shield on the Gor too. I moved up and split them to send the Ungor into the Megaboss and Brutes on the right and the Gor into the 5 Brutes holding the enemy objective. Mojgorox followed the Gor. The Bestigor were still stuck in combat with 10 Brutes over on the left. The GBS moved back to claim my own objective, something I should have done from the beginning. All charges went off and the Ungor piled into the Megaboss, the Gor into the Brutes too and Mojgorox also into the middle Brutes. I elected to go first with my Gors who rolled up for Anarchy and Mayhem gaining an extra attack and +1 to wound. They also gained the Great Destroyer, so +1 to hit. The problem being, I couldn't get more than 12 in though due to the size of the bases for the Gor. I killed 2 Brutes though which was pretty good. The fight was returned on my Ungors and 12! went down. I went next with my Bestigor and took down another 2 Brutes before Matt went up against Mojgorox taking 2 wounds off him, the Gor were left untouched. 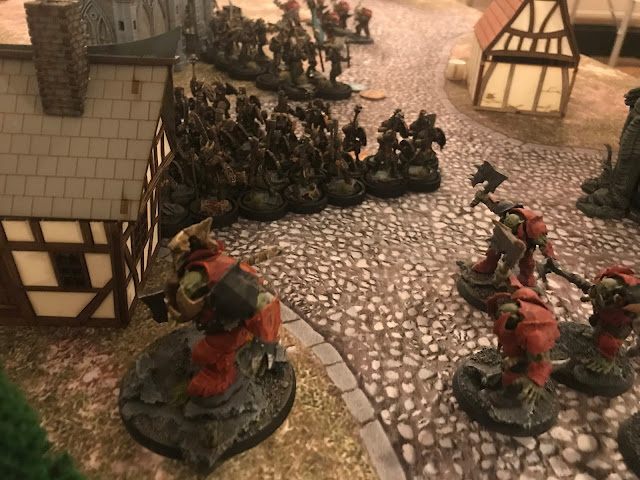 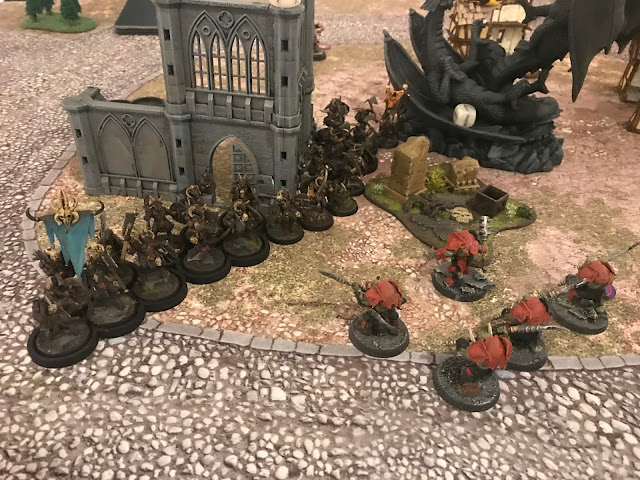 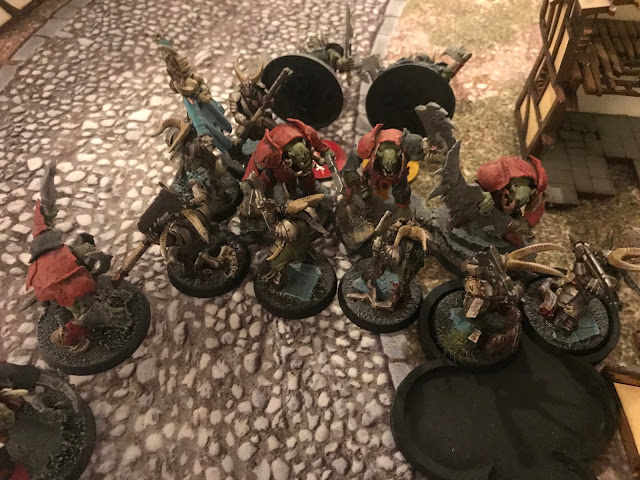 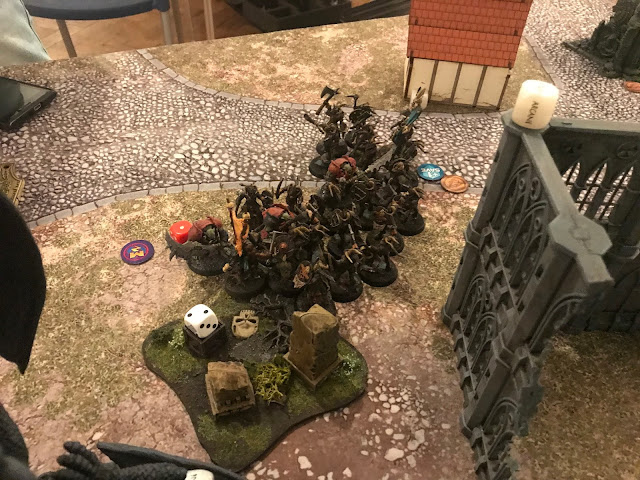 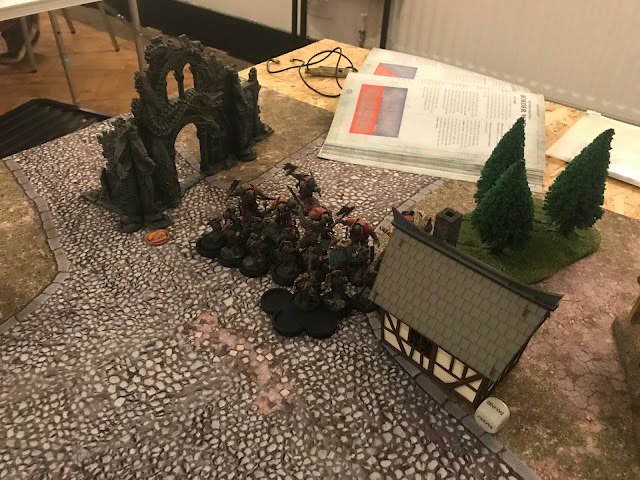 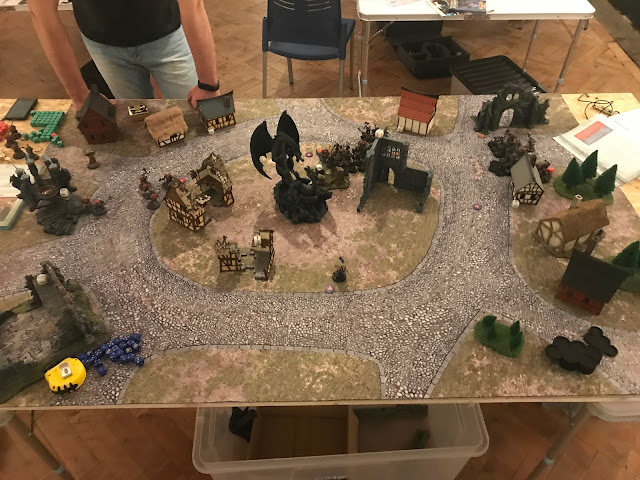 Matts turn 2: With the Bestigor now cleared out, the Brutes started moving towards the GBS in the middle. The Megaboss continued clearing through the Ungor and the Brutes in the middle went down to the Gor and Mojgorox, crucially the Ungor still had bodies remaining pinning the Megaboss and Brutes for another turn. 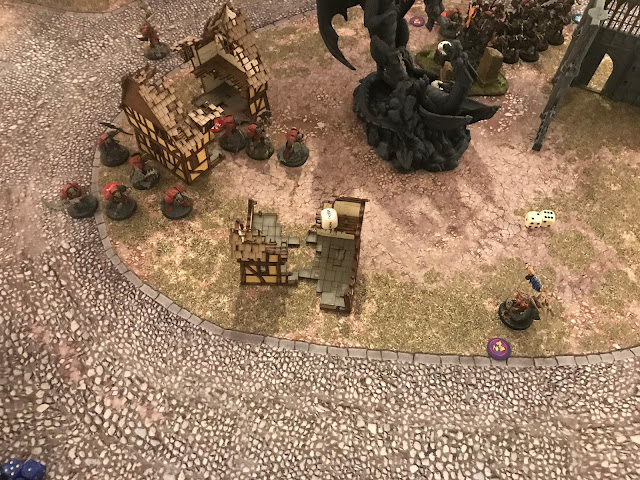 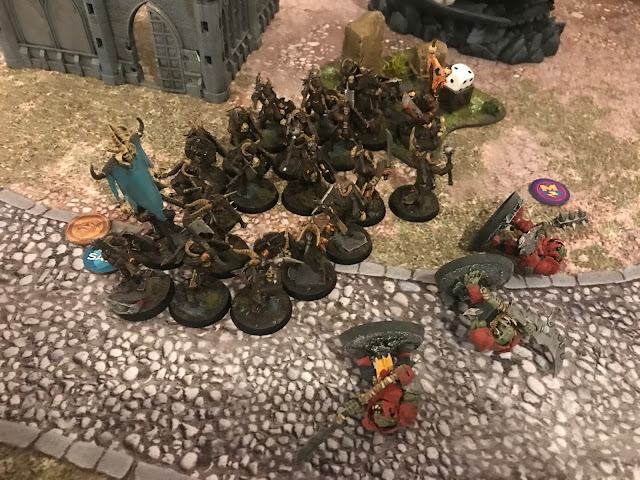 Turn 3:
Matts turn 3: Matt won priority and got a double turn, he moved across and murdered my GBS, claiming my objective to start raking up the 4 points from this one, the Megaboss and brutes finished off the last of the Ungors 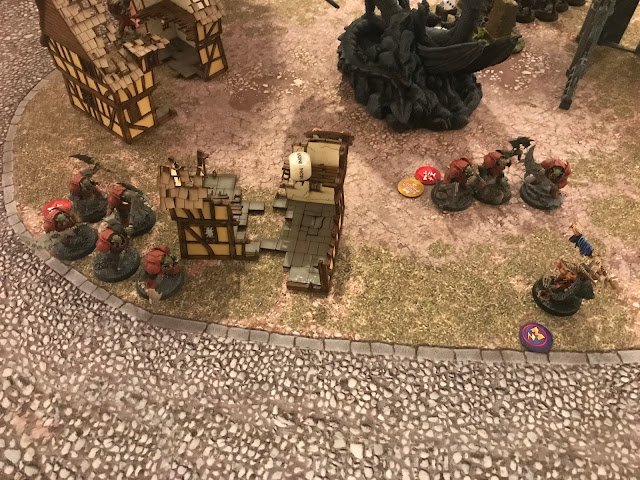 My Turn 3: I had a decision to make, either go hold up the Megaboss and 1 unit of brutes on the right or come down and charge the 2 units of brutes and Warchanter. I decided to go right and attack the brutes. My Gor did not fair well against them... although I did take one down. 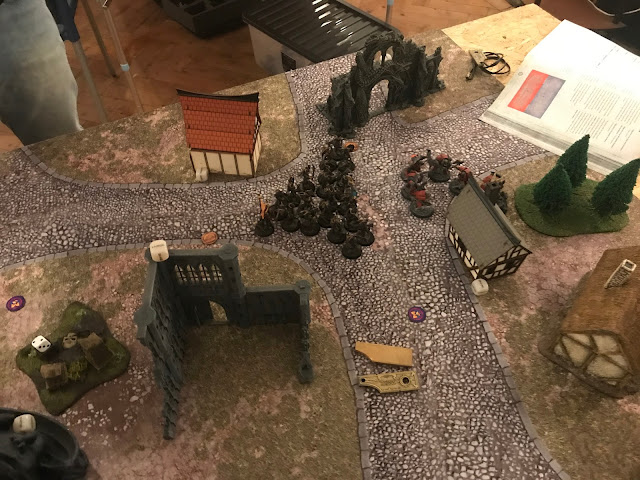 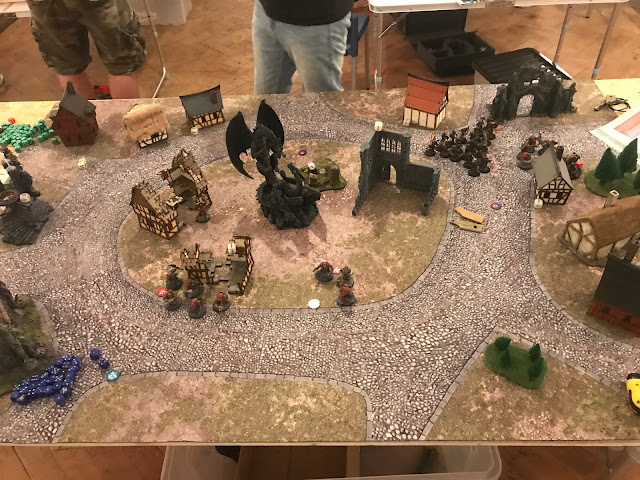 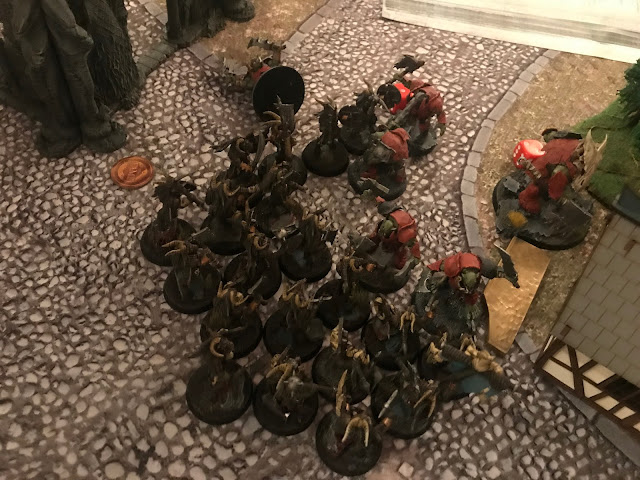 Turn 4:
My Turn 4: The Gor continued chopping up the Brutes and being chopped in return. Nothing else really happened..

Matts turn 4: He moved up his army to reclaim his own objective and also killed the Gor down to 3 remaining once his Megaboss got into the fight. 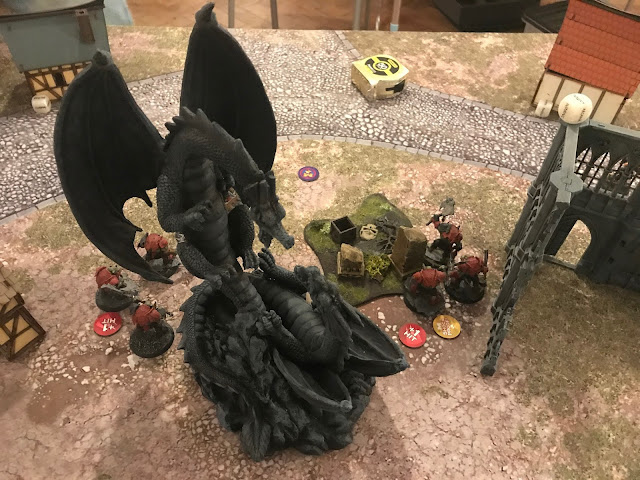 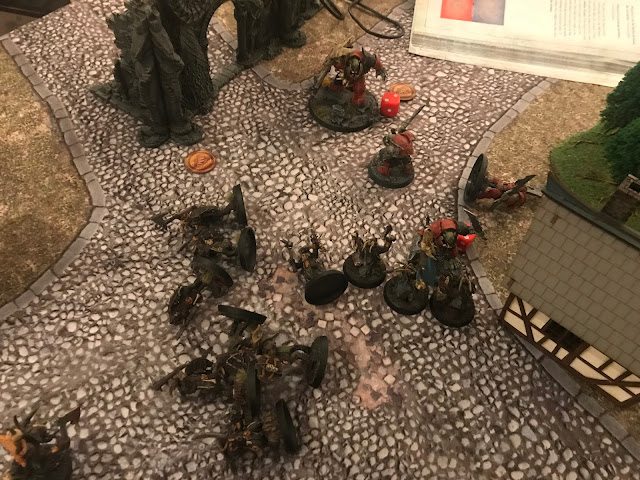 Turn 5:
My Turn 5: I retreated my Gor to attempt to protect the objective and charged in Mojgorox to hold the brutes up once again, I killed one more brute leaving him with one remaining in that unit. 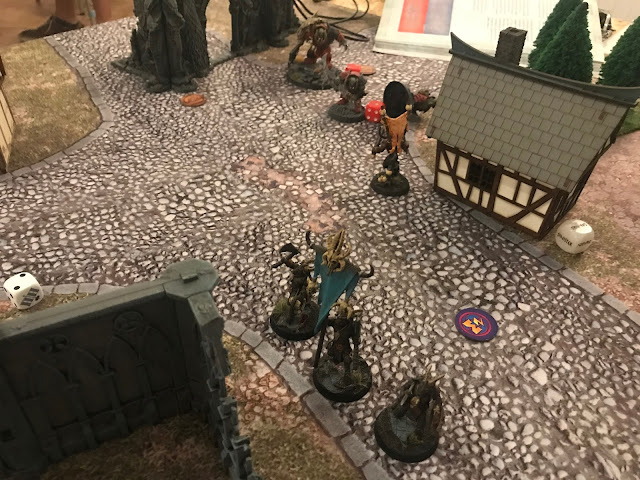 Matts turn 5: The megaboss charged Mojgorox and the brutes came across from the middle to charge the Gor, this was the end for me, all units were killed and I was tabled..

The score was 25-25, I was up all game from early point grabs but on the last turn having killed all my units, matt had claimed all 4 objectives and got the 9 points needed to tie the objective points, because of kill points, Matt won a Minor Victory..

This goes back to my mistake in Turn 1 of moving off my own objective and missing out on that 1 point.. This would have won me the game with a Major Victory. 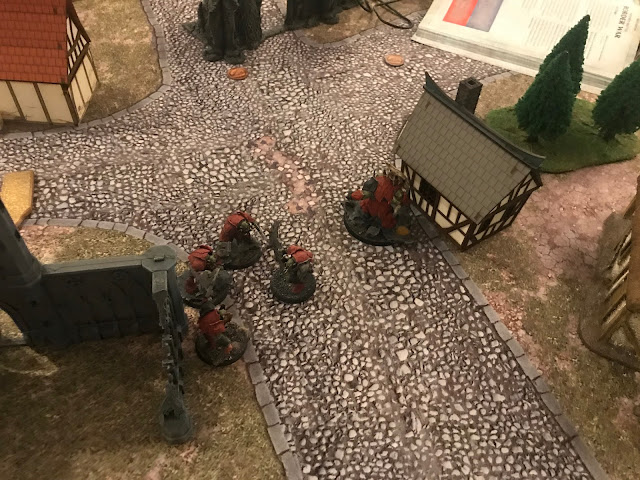 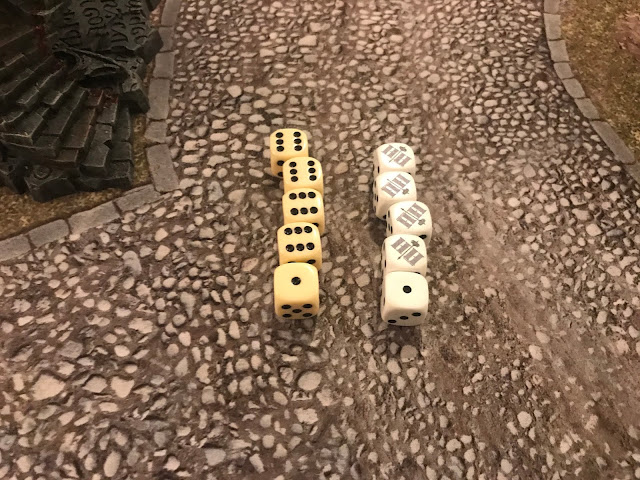 After game thoughts:
I learned so much in this game, it was my first with the Brayherd. I was I believe a little too eager to get at him in turn 1 and left myself open a little too much, the big block of Ungor and Gor in the middle is definitely a good idea as it is an avoidance part of the army for the enemy and also gives good board control. Gore definitely need the Beastlord around them to give them the buffs. The army does lack good shooting but does make up for it in speed. The real issue is lack of damage. Most if not all of the Brayherd only deal 1 damage. At 1k, fitting monsters in from other Chaos factions is probably overkill, but at 1.5k or 2k, I believe a monster, or at least option for a monster is needed. It was a great fun game though and a great one to learn, Ironjawz are tough as nails and hit hard too, it was never going to be easy but with a few key decisions I could have easily taken the Major but...